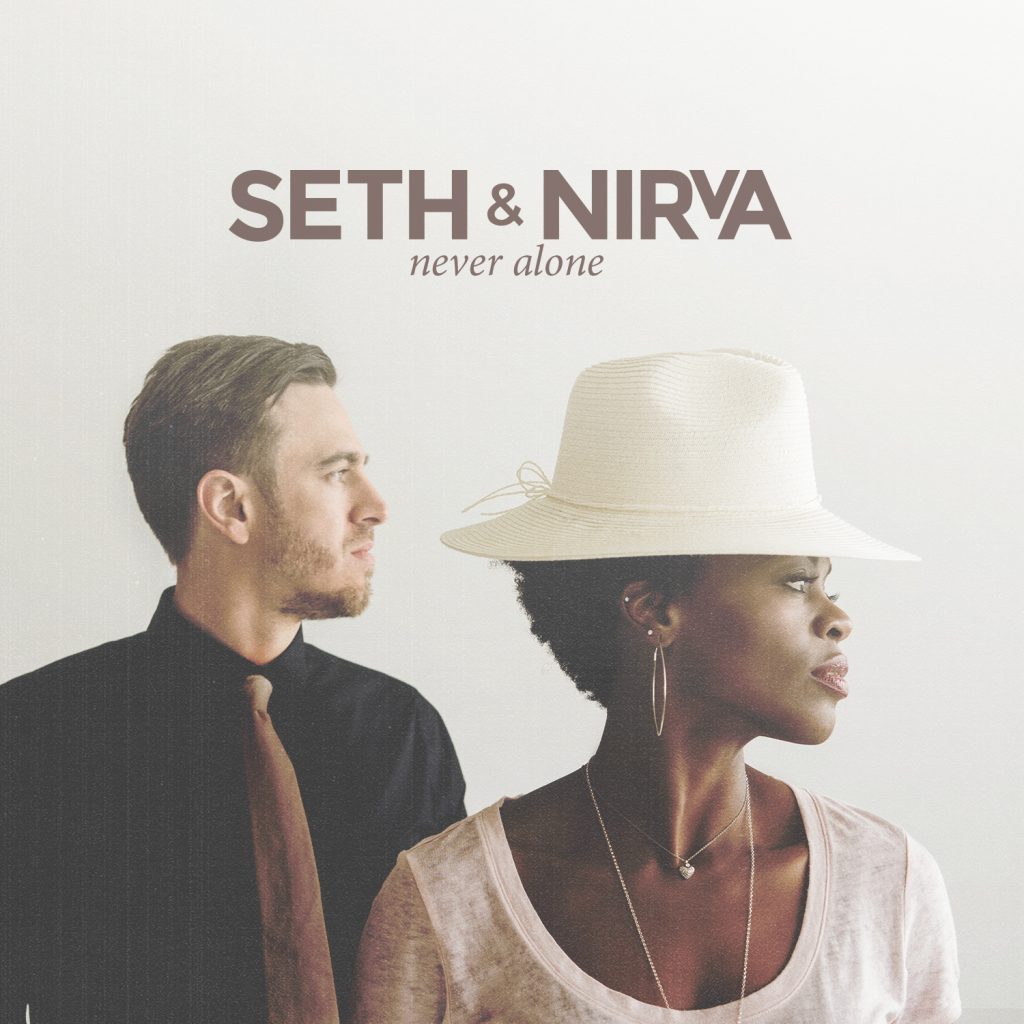 Husband and wife duo Seth and Nirva released their first full length album this past May entitled Never Alone, the follow up release to their 2013 I Need You EP. Many music fans may know Nirva Ready from her vocals on TobyMac’s albums and her show- stopping stage presence on tour with the DiverseCity band. Her husband Seth Ready began his musical career singing with Kirk Franklin, and since then has been a background vocalist for various artists, including Chris Tomlin, Donnie McClurkin and CeCe Winans.

The album begins with the track “You Are in Control”, with Seth’s vocals building up to the chorus, sung by Nirva. The song’s lyrics are of surrender to the will of God. The bridge repeats “You hold it all together/ You are in control”. The verses are driven by a steady drum beat and later adds a simple chord progression behind it for the chorus.

Featuring DiverseCity band member DJ Maj, “Pour It Out” begins with an R&B rhythm accompanied by a smooth verse by Seth. The song brings to mind a southern Gospel vibe to it by adding trumpet and a chorus of voices to accompany the vocals of Seth, Nirva and DJ Maj. One of the longer songs on this album, the song ends with a slowed down beat, stripped of all other music and the beautiful blend of vocals singing the lyrics “It’s Your Breath in our lungs/So we pour out our praise to You only” to lead into the next track, the popular worship song “Great Are You Lord”. Nirva sang lead vocals on this one over subtle piano chords, strings, and some synth incorporated for the chorus to complete the cover.

“Brother” features Tobymac, and is written towards the idea that Toby and all members of the DiverseCity Band promote- that everyone is our brother. The repeated lyric “When I look into the face of my enemy I see my brother” speaks to the love and compassion God calls us to.

Lyrically poetic, “Should’ve Been Mine” is a song articulating that the sufferings of Christ on the cross should have been ours, but instead He died to bring us freedom. Seth takes lead in the bridge singing “I’m not living under sin/ sin is underneath my feet/ I’m not bowing down to fear/ fear is bowing down to me”, repeating to a crescendo that circles back to the chorus.

“Be With Us”, with its simple lyrics but humble cry of desperation puts to music the heart’s plea longing to be closer to God, recognizing that only He has the answers. More on the upbeat side, “Unconditionally” evokes a sense of confidence in the unconditional love of God, that He loves us despite our faults. “You Are With Me” is another somber song with vocals driven by Seth as Nirva harmonizes in the background. This tune showcases Seth’s vocal ability, but the lyrics are a bit too repetitive.

The title track “Never Alone” features Shonlock and starts with Seth’s soft vocals building up to the chorus that Seth and Nirva hope to be an anthem to the generation of believers. Shonlock’s appearance on the song is appropriate to the audience of young people that it was intended for by emphasizing his rap talent in the song.

Continuing the theme of God’s love in this album, “Love Never Fails” is another worship song. The focal point is the lyrics, as the music is a simple percussion riff and guitar in the background. Here Seth and Nirva’s vocal harmonies blend effortlessly in worship to God. At the end a blend of instruments come back with the refrain “It never will, it never will/ Your love won’t fail, Your love won’t fail”.

Closing the album is the lively pop driven song “We Won’t Back Down”. It serves as a closing statement that Seth and Nirva Ready won’t back down or shy away from their faith. The album overall is well done for a first full length release. Lyrically, the songs are fresh and offer a mix of worship songs and pop songs. Those who enjoy Tobymac’s style of pop and funk will find themselves liking these songs. The quality of production is also well done as the producer, Bryan Fowler, worked on TobyMac’s albums as well. Vocally, it is clear that both Seth and Nirva are strong singers. They both bring years of experience to the project and it is evident that they each have something to bring to the table in terms of talent. Their voices complement each other and at times one can hear the places where Seth stepped back to allow his wife a chance to showcase her powerful singing voice. Never Alone is a strong start to Seth and Nirva’s future in the industry singing together.