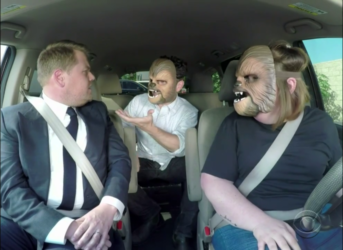 We’ve all seen it by now, an everyday mum’s pure joy at her new Chewbacca mask purchase from Kohl’s department store. At almost 142 million views it is by far the most popular Facebook live video so far and the joy emanating from Texas worship leader Candace Payne has been bringing smiles to the faces of millions across the globe over the last 5 days. The excitement for Candace didn’t stop there though. Not only was the moment given the songify treatment by The Gregory Brothers but she also “helped” The Late Late Show host James Corden “get to work” this week with assistance from a certain JJ Abrams.

Think the excitement for Candace stops there? You’d be wrong. She was also a guest on The Late Late show where James Corden read out a surprise note from the real Chewbacca Peter Mayhew for Candace in which Peter reveals a surprise gift for Candace (you’ll have to watch the video to find out what it is!).

So it stops there right? Nope! On the day the video went viral, Kohl’s gave her kids a ton of Star Wars toys to thank her for the free publicity, reports WFAA. She also told WFAA what she attributes the video’s success to, “I think people were with me, going ‘I needed that, I needed that.’ I was in my kitchen, face down on the floor for an hour-and-a-half, just thanking God for letting me share this joy with everybody.” She’s also said that she’s been getting messages from lots of grieving people thanking her for the video, including one from an appreciative mother who has an autistic daughter who hasn’t laughed in a long while, until she saw Payne and her silly impulse buy on social media.

From all of us here at JesusWired, thank you Candace for bringing so much joy to everyone around the world. All of the videos can be seen below, including the original viral video of course!

And remember folks, it’s the simple joys in life…