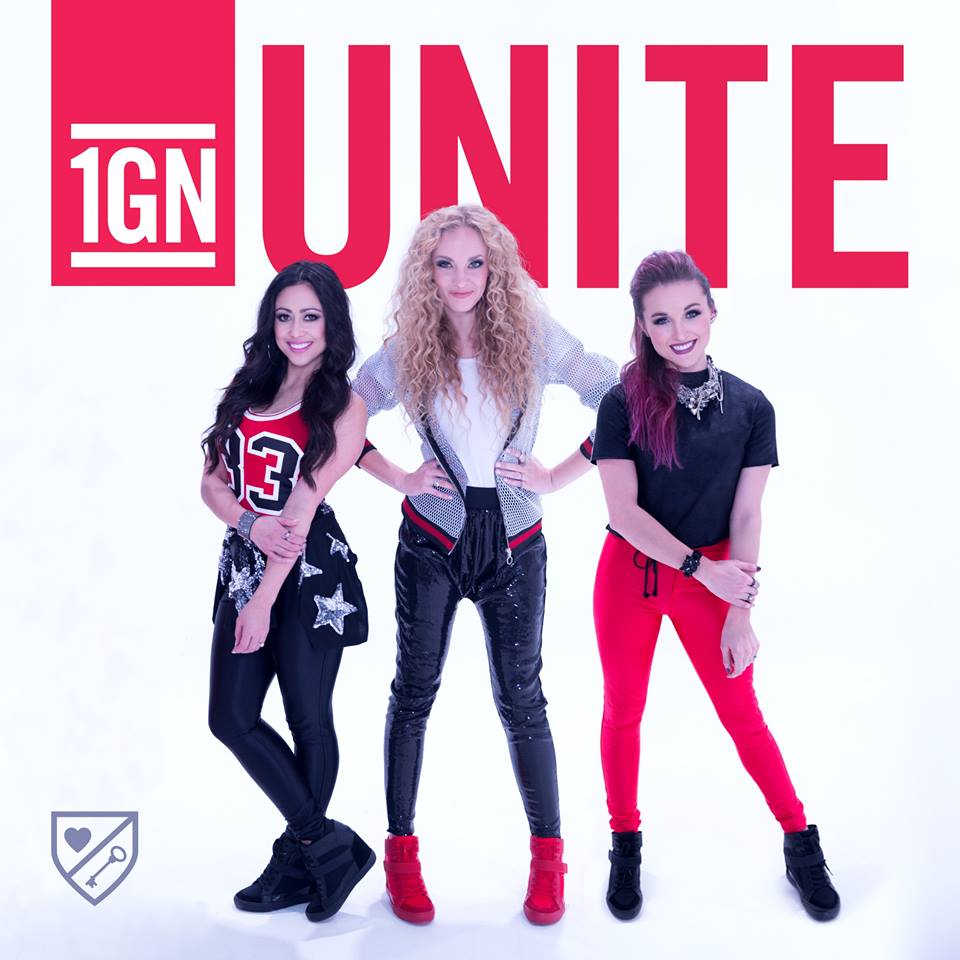 In 2013, 1 Girl Nation officially announced their arrival on the Christian music scene with their well received self-titled album, which went on to earn them a Dove nomination for “New Artist of the Year.” Following the departure of two of the founding members Kelsey Grimm and Lindsey Adamec to pursue their own musical pursuits, and other hardships, the remaining three, comprised of Carmen Hadley, Kayli Robinson, and Lauryn Taylor Bach, have united and are stronger than ever as they release their much anticipated new album Unite today under their new moniker 1GN. So without further ado, let’s take a closer look at Unite…

Unite gets off to a raucous and, well, “hype” start with the album’s lead single “Get Hype.” Already getting plenty of airplay on Air1, “Get Hype” is a fun, crowd warming electronic track that should have mainstream hit written all over it. Pumped chock-a-block with ground shaking beats, speaker rattling bass and in-yer-face energetic fun lyrics, “Get Hype” is a massive deviation from the sound found on their first album and may catch many listeners by surprise at first but it’ll only take a few seconds for those fans to be caught up in the track and losing their minds as their feet dance all over the place quicker than they know what’s going on. There’s no lyrical depth to be found here “Ready, set, go, get up get loud, tell everyone you know, around the world, from left to right, it starts tonight” but “Get Hype” pulls absolutely no punches and gets Unite off to a hundred-mile-an-hour start.

1GN take their foot off the accelerator a little bit on “The One” as they proudly put their faith up on a pedestal for all to see. Synths and a steady prominent beat provide the backbone for a track that declares our God is “the one who’s always by my side.” It’s that backbone that combines with a few well placed electronic breakdowns and drops that elevates this song from just being an all out worship song to a track that’s sure to keep the listeners’ feet dancing and Unite off to an energetic start.

Lauryn’s punchy raps steal the show and take on the starring role in “Cinema,” with Carmen’s & Kayli’s vocals taking on the supporting roles. All three vocalists complement each other nicely throughout, with Kayli’s vocals after Lauryn’s ‘big moment’ carrying a spine tingling air to them. Cleverly tying a girls’ fun night out at the movies into an introspective look into the idea of our lives being the ones on show on the big screen, “Cinema” is brilliantly written and is easily one of the album’s standout songs. “If my life was a cinema, what would my story tell, would the tickets sell, were you in the frame, if my life was a cinema, did you play the lead, were you directing me, did I bring you fame?”

Filled with beautiful harmonies, “Guard Your Heart” tackles the busyness and hardships of life weighing our souls down and encourages the listener to “keep your faith and guard your heart” and that they are a “diamond in the rough”, no matter what’s going on around us. Comforting in nature, “Guard Your Heart” is sure to be the soundtrack to many teenage girls’ lives as they tackle school and the resulting challenges.

The sound of paparazzi camera clicks generally doesn’t work in songs, they feel unnecessary, but “No Filter” is the exception to this as they fit seamlessly into the soundscape and theme of a fun, upbeat track. Stepping out from the superficialness found in the ‘highlight reel’ of perfect selfies on social media, “No Filter” proudly declares “this is me, no filter” and carries with it an important message rarely provided in music. “If the highlight reel is all you see, where’s reality?”

Following on from where “No Filter” left off, and in a similar vein to “Guard Your Heart,” “Haters” encourages the listener not to believe all the haters on social media and that God loves them just the way they are. Carrying a similar swag to Taylor Swift’s “Shake It Off,” “Haters” also touches on Matthew 5:44 and the principle of loving your haters, with the hook “haters gonna hate, love them anyway, no matter what they say, love them anyway” set to undoubtedly become an earworm for many a listener.

Musically, “Panic” comes out of left field, with strings and piano leading the way, showing the group’s diversity in the process. Taking us on a journey from being afraid and wanting to run away from the hardships of this world, to being secure in the knowledge that God’s by your side and His power simply can’t be tamed, “Panic” is sure to provide courage for many.

The fun synth filled vibe is resumed with “Impossible,” an infectiously joyous track detailing how there’s no “Impossible” with God, especially when it comes to our dreams. “I used to say the sky was the limit, but you’ve opened my eyes to what’s really true.”  Accompanied by some subtly crucial guitar and piano sounds, the candy coated pop synths throughout are delightfully upbeat, but it’s the lip smackingly good drop towards the end that really elevates this song to the next level.

“Smile” keeps the infectious, smile-inducing pop tone going as we enter Unite’s final chapters. Centered around how infectious and joy inducing just one smile can be, “Smile” will have listeners dancing and clapping throughout as they ‘smile’ from ear to ear, singing praise unashamedly to God for his sacrifice upon the cross wherever they are.

That shout-it-from-the-rooftops/unashamed-of-our-faith theme continues on the album’s closing and title track, “Unite.”  Acting mainly as a rallying call for all girls to come together and ‘unite’ in taking a stand for Jesus, “Unite” builds beautifully throughout the whole song, sweeping up the listener as it goes. By the anthemic song’s close, every female listener (and some male ones too!) will be belting out the lyrics as one, truly ‘uniting’ us in one common mission, to spread the love of God worldwide. “Let’s show the world tonight, let’s unite, calling all girls to rise, one heart, one mind, one love, bringing us together, bringing us to life, together we’re stronger, you and I.”

If you were to substitute negative and degrading messages into 1GN’s music and place them in the secular arena, they’d fit right in and be topping the charts. That is to their credit, and is their biggest selling point though; there aren’t any negative, or degrading, or immoral, messages to be found here, just positive and uplifting ones. 1GN are set to be both positive role models for thousands of teen Christian girls, and be considered this generation’s Barlow Girl and Jump5 thrown into one, with some Owl City dance synths thrown in for good measure.

From the smooth vocals of all three members and the punchy raps of Lauryn, to the infectiously joyous and dance inducing synth packed soundscapes, to the unashamed Christian themes, to the encouraging and uniting messages, and the flawless performance of it all, there’s little wrong to be found on Unite, if any can be found at all. Carmen, Kayli and Lauryn have well and truly delivered, and then some. Unite blows their debut release out of the water and is set to blow down the doors to a much wider audience for themselves as well. Expect to hear the likes of “Cinema,” “Impossible,” and my personal favourite, “Unite” having huge success at radio, and expect to hear the name 1GN for a long time to come. They’re here to stay, and I, for one, am looking forward to what the future holds for this terrific trio. Now, let’s “Get Hype” and “Unite” to do the “Impossible” and spread the good news of Christ to all nations!

The brand new music video for “Get Hype” can be seen on the website here.

My interview with the band will be posted later today.

ABOUT 1GN: 1GN, comprised of Lauryn Taylor Bach, Kayli Robinson and Carmen Hadley, blends upbeat, relevant pop music, with lyrics that are focused on one united message of overcoming hate with love, and living boldly for Christ, even while having fun. Their self-titled debut album 1 Girl Nation was released in August 2013, which reached No. 2 on Billboard‘s Heatseeker Albums chart and No. 9 on Billboard‘s Top Christian Albums chart. 1GN has played on more than 80 “Secret Keeper Girl Tour” concert dates, co-headlined the “While We’re Young” Tour with OBB and performed at Disney’s Night of Joy. The group earned a “New Artist of the Year” nomination for the 45th Annual GMA Dove Awards. Their sophomore album, Unite, will release April 15, 2016.