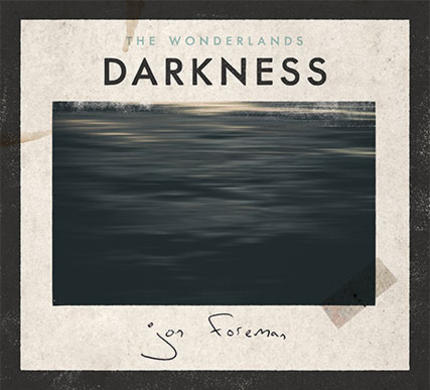 Jon Foreman Sings through the Darkness on “The Wonderlands: Darkness” EP

Darkness is Jon Foreman’s third release in his “opus of light and darkness” entitled The Wonderlands. The EP is part of a 25 song project, released in four EPs of 6 songs in each, with Darkness sneaking in a seventh track. Foreman intended each song to go with each hour of the day, where each song represents an hour. These songs are meant for the hours 11PM-4AM.

Beginning the EP, “Come Home” has simple instrumentation of piano chords, strings, and percussion underlying the melody which Foreman sings. The song overall has a gloomy mood to it. Lyrically, the song is a plea begging the return of a wandering soul in “if this is meaning of life/you were born for the dance, not the fight/ Won’t you come home?” The bridge incorporates some accordion matched with background vocals done by Foreman himself and the song ends as quietly as it began. Themes of hope and reconciliation come to mind when hearing this song, especially in the lines, “nothing hurts worse than a hope that’s deferred/so don’t let this slip away/ See you shining under the shame”.

The introduction of track 2 “Beautiful (Part II) is haunting vocals over dark tones of a guitar and piano chords with light tones of melody faintly heard in the background. The song speaks of a girl who hides behind a mask to conceal the pain on the inside, which is a common theme in Foreman’s songwriting. On the musical side, beneath the verses are a guitar and simple drums, and the chorus rolls in with the same drum track underlying strings. In the interludes, that same light-sounding melody plays in the background of vocals as the music swells. Stand out lyrics in the verse “under the veil that she wears/ she’s still feeling lonely and scared” contrast with the chorus saying “You look like a funeral but I see right through, You’re so beautiful”.

“You Alone” is more upbeat, with acoustic guitar leading the song. The song speaks of surrender to God’s control in the simple lyrics of the chorus “You alone, You alone/ You alone can heal my soul”. This track is the most hopeful of the EP as Foreman points to God as the only one who can heal.

Piano, guitar and the cello playing of Foreman’s longtime friend Keith Tutt II lead into “She Said”. Similar to “Beautiful Part II” and “Come Home” there is the recurring theme of hope in the midst of broken and seemingly hopeless life situations. “You’re the only thing that’s true/ In this whole world of black eyed blues/ And disillusioned points of view” stick out as the point of realization that there is hope to be found in the dark places.

“Larger than Life” also speaks to the idea of hope and individual worth as Foreman so repetitively speaks into a culture where people often feel brushed aside. “June and Johnny” is a tribute to the Cash’s with Jon’s vocals over acoustic guitar. Female vocalist Sara Watkins makes the duet and adds her talent as a violinist to the song. On the lighter side of late night romance, lyrics “Love was our timeless song/ and I’ll hold you all my life like a memory at the back of my mind” exemplify the whim  of summer love.

The EP closes with “Inner Peace”. The song emphasizes the vocal quality speaking to the deepest and darkest part of the night where we so often question why life is chaotic in our endless search of elusive peace. The music of light entrances and exits of instruments evoke the emotions associated with these feelings of searching and questioning. “I’m looking for the one that made me” is the refrain that ends the song, stating that the search for inner peace is ongoing.

Overall, the album has deeper and darker lyrics that match the feelings of restlessness, hopelessness, and doubt that come with the late hours of the night. It matches that with interludes of hope in each dark tune, suggesting that there is something more. It can be argued that ”June and Johnny” does not match the Darkness theme at all, but for all the late nights of questioning there are nights of spontaneity and fun. Musically, the instruments Foreman chose to include on the EP match the emotions and even enhance the mood that Foreman intended to portray.