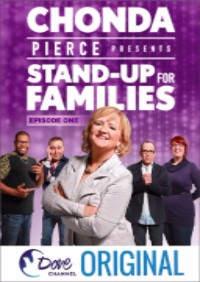 The one-hour long episodes feature “The Queen of Clean’s” trademark combination of fierce wit and southern charm in all three of the family-friendly episodes.  Adding to the clean fun, some of her closest friends and all-star comedians will also take the stage. The lineup will include the talents of Bone Hampton, Brad Stine, PJ Walsh, Nazareth, Joby Saad, Michael Joiner, Taylor Mason, Anthony Griffith, Sandi Joy, Kay Dodd, Lisa Mills, Chinnitta Morris, Cleto Rodriguez, Michael Jr., and Rik Roberts.
Taped in Nashville, Tenn.,”Chonda Pierce Presents: Stand-Up For Families” is designed for families to safely enjoy together without worrying about offensive language or subject matter.  Like all content on the Dove Channel, the series will carry The Dove Foundation’s Seal of Approval.

“The taping was such a blast!” shares Pierce. “Not a dry eye in the place from all the jokes! It was great to see the vision come to life and witness the joy it brought to the live audience. My hope is to bring families together through laughter, and I believe this series is the key.”

The special was Executive Produced by Pierce, her manager, Andrew Tenenbaum of Creative Management and Productions, along with Bill Sondheim and Yolanda Macias of Cinedigm and Stephen Yake served as Director, whose credits include the stand-up special, “Chonda Pierce: I’m Kind of a Big Deal.”

“Chonda Pierce Presents: Stand-Up For Families” is the first of a new original programming initiative launched by the network. Dove Channel is planning to green-light several series, both scripted and non-scripted, to premiere on the channel over the next year.

Dove Channel can be viewed across a broad spectrum of connected devices including Roku® Players and Roku TV™ models, Android and Mac iOS, Samsung Smart TV, the web, and mobile and tablet devices.