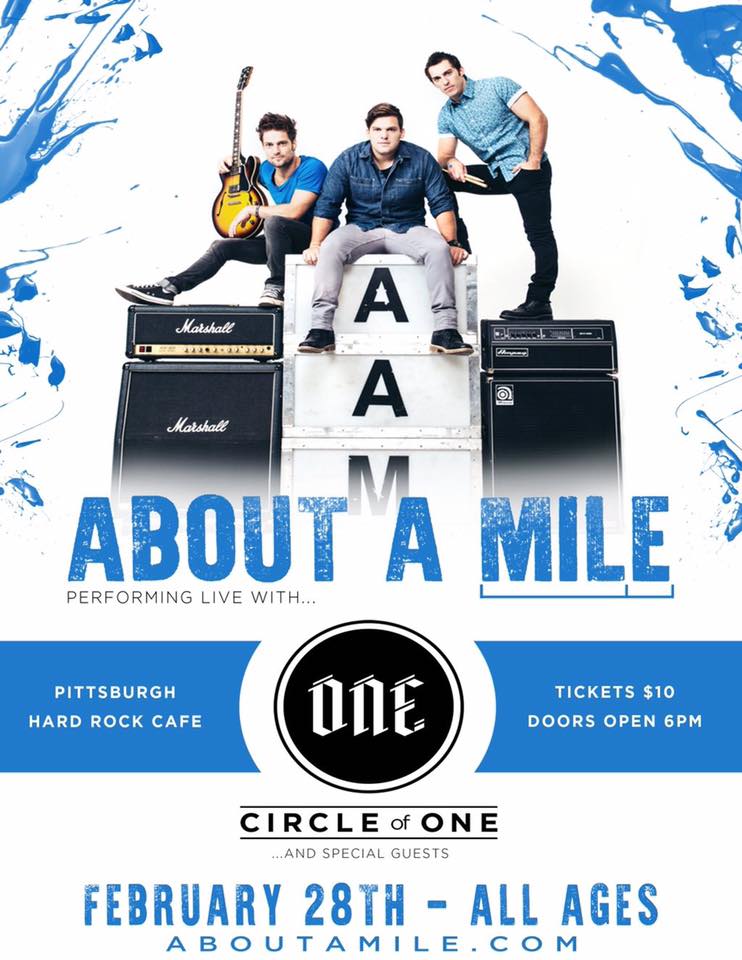 About A Mile, Ellie Stanchak, Erik Kerr, and Circle of One Bring the Message of Christ the Solid Rock to the Hard Rock Cafe

The Hard Rock Café in Pittsburgh might not have been prepared for what was about to transpire on the evening of February 28th.  Accustomed to rock and roll, the regular crowd was perhaps surprised when opening act Ellie Stanchak took the stage and began belting out praise and worship choruses normally reserved for Sunday mornings.  Her acoustic set was encouraging and inspiring, and set the tone for the evening.  Next up was Erik Kerr, who got the crowd moving with his band’s unique blend of reggae, jazz, pop, and a little bit of blues, all rolled in to one infectious, toe-tapping mix.

The third band of the evening was Circle of One, a local rock and roll/metal band.  If the audience wasn’t quite awake before, they were certainly brought to life by this hard-hitting, energizing band.  The flashing of the strobe lights and the tenacious beats of the drums all spoke of the exciting life that is possible through a relationship with Jesus Christ.

After a brief set change, main act About A Mile stepped up to the mic and kicked things off with the up-tempo “In With the Out Crowd.”  During a brief pause in the song, lead singer Adam Klute spoke of how Christians are sometimes considered outsiders, and that our radical approach to life might earn us the title of “freaks.”  As he finished up speaking his thoughts, the band launched into dc Talk’s “Jesus Freak,” a classic ‘90s Christian anthem.

Next up was “Satisfied,” which encourages believers to find their true satisfaction in a relationship with God.  In the middle of the song, Adam, who is also the band’s guitar player, showed off his guitar playing skills on a table top acoustic guitar.  The rest of their set was filled with About A Mile’s excellent songs, with a few hymns and praise songs thrown in for good measure.  The band created the perfect blend, starting with their song “The Power of the Cross” and flowing seamlessly into “Nothing But the Blood of Jesus.”

Throughout the night, Luke Klute supplied the band with one impressive bass riff after another, while brother Levi kept everyone on track with his skilled drumming.  At one point, Adam looked around at all the memorabilia adorning the walls, making the observation that, as impressive as the talent of these classic rock gods may have been, it is only the One, True God that is deserving of our worship and adoration.

About A Mile ended the show with “I Hate Hate.”  Adam briefly spoke about how much hate and violence is in the world, and how as Christians we should hate those acts of hatred, and instead be beacons of love and light in a dark world.  The bands who took the stage that evening certainly exemplified that love and light, and all who were in attendance left feeling more encouraged and loved than when they had arrived.