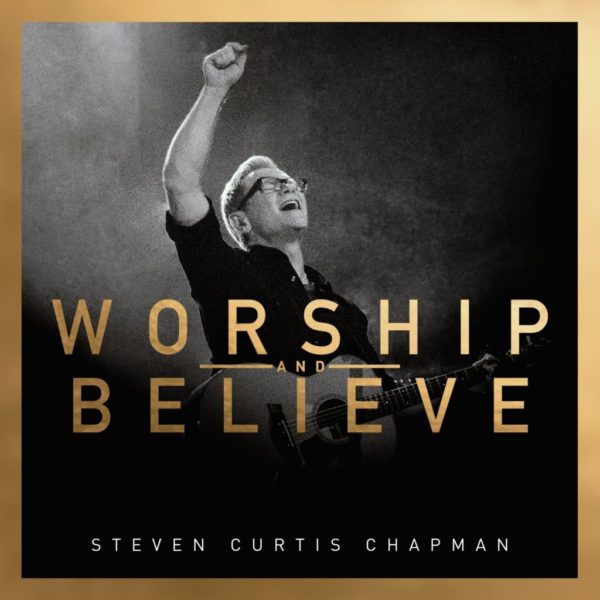 Steven Curtis Chapman is no stranger to the Christian faith or the Christian music industry. He’s practically a legend in Christian music. His love of music began when he was a child growing up in Kentucky but his music career began first as only a songwriter for other artists such as Glen Campbell and then took off in the early 1990s after the release of his first album in 1987, First Hand.

Fast forward to today and his newest album Worship and Believe is Chapman’s 19th studio album. This is different from any other album released by Chapman as the project overall is a Hillsong-inspired effort with Chapman’s signature touch and sound. It’s worthy of being played in churches worldwide. The album was released by Reunion Records (Chapman’s new label as of 2013) on March 4, 2016. The album features studio versions of all eleven tracks as well as six live versions of select tracks.

“We Believe”: The opening track to the album contains Chapman’s familiar voice and songwriting style but with the worship stylings and musicality of a Hillsong track. It’s a declaration of what believers stand on in faith through Christ.

“One True God”: Featuring co-writing efforts from both Matt Redman and Chris Tomlin, it’s a statement of faith in one God and his power. The track also features vocals from Chris Tomlin.

“Amen”: Featuring co-writing with Rend Collective, it’s definitely a Sunday morning worship anthem that is destined to wake up the congregations worldwide. Musically, it still sounds like Chapman’s pop signature sound but comes off as more of a worship song.

“Hallelujah, You Are Good”: Featuring co-writing and vocals from Matt Maher, it’s a declaration of God’s goodness reminding a believer of Psalm 34:10 which says, Taste and See that the Lord is Good.

“More Than Conquerors”: The worship version of Francesca Batistelli’s “Giants Fall,” this has to be my favorite off the entire album because of its up-tempo Chapman signature musicality. The song is based off Romans 8:37.

“Sing For You”: I thoroughly enjoy the musicality of the simple guitar in this track. It’s a pure worship song that should be used in churches in worldwide.

“Who You Say You Are”: This song is a bit slow with just Chapman singing alongside a piano but it’s still heartfelt in worship and thankfulness to the Lord.

“We Are Listening”: An intimate worship song talking directly to the Holy Spirit.

“God of Forever”: The final studio track on the album and deluxe version of the album, it reminds us that we are made to love and be loved and called as children of God.

Worship and Believe is definitely a rock solid effort of worship from Steven Curtis Chapman and even though this is his 19th album, his ear for good music mixed with faith-filled songwriting has not grown tone deaf but instead has gotten better with time.

This article was written by guest reviewer Chelsea DeVries. Want to write a one-off guest review? Contact us here.

Chelsea’s bio: When Chelsea DeVries is not writing for JesusWired.com, she is writing, period. She self-published her first YA romance novel “Dream Girl” at the age of fifteen and the sequel, “Jessica’s Choice,” at the age of sixteen. Today, she has published a re-write of the original works on Chanillo.com. She is currently working on her nonfiction creative memoir about a near-death experience and hopes to become a publicist now that she holds a marketing degree from Saint Leo University. She lives in Port Richey, FL with her family and two amazing dogs Hazel and Katrina. One day she hopes to become Hot Chelle Rae’s publicist and a NYT best-selling author. She believes all things are possible with God. http://chellyzlife.blogspot.com