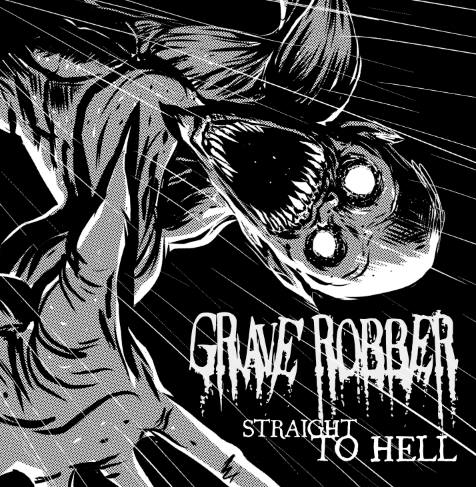 Grave Robber, a horror punk band from Indiana, certainly makes a statement with their unique approach.  Dressed as zombies, their aim is to “scare the hell” out of listeners.  Their most recent EP, Straight to Hell, is a prime example of this.

The EP begins with the title track, the opening sustained guitar chord setting an eerie mood.  After a few seconds, gang vocals and an intense, driving drum beat bring the song to life.  “Straight to Hell” lists several evil things of this world – anger, hate, addiction, deceit – and condemns them all to hell.  “Hunger Haunts” creatively brings attention to the less fortunate.  It would be natural to be fearful of such monsters as a zombie or poltergeist, but what should haunt us even more than the thought of creatures of the night is the thought that many children often go hungry, their stomachs growling like the howl of a werewolf.  Throughout the entire song, the bass never quits, and the chunky guitar chords give the song some impressive forward momentum.

In keeping with the theme of monsters, “Beast of Busco” is a rather catchy nod to local beast “Oscar,” the 500 pound snapping turtle, allegedly spotted in the late 1940s but never caught.  The interesting chord progressions give this song an exciting rock flavor, and the melody works in perfect harmony, giving listeners something to hum along to.  “Mummator” was originally written as the theme song for the comic book “Mummator and the Conquerors of the Cosmos.”  Once again, the bass is the driving force, right in the pocket with the drums, driving the song forward.

The gravelly vocals of Wretched Graverobber are perfect for this band, adding just the right haunting touch.  Straight to Hell provides an excellent choice for fans who are drawn to heavier music, offering some positivity in an often dark and haunted world.