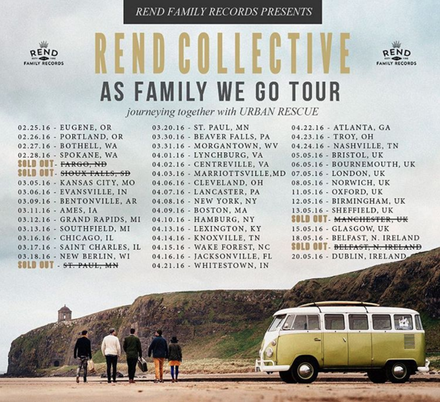 Rend Collective To Kick Off As Family We Go Tour

For Irish worship band Rend Collective, As Family We Go is more of a mantra than an album title as the five-piece group gears up to hit the road for their 48-city As Family We Go Headlining Tour. With spouses and children along for the journey, the close-knit band will kick off the tour February 25 in Eugene, OR. with dates across the U.S., U.K. and Ireland.

Featuring special guest Urban Rescue, the tour is already seeing sold out dates. The band is no stranger to the stage, having toured alongside acts such as Chris Tomlin, MercyMe and currently, Hillsong UNITED on the Empires Tour. The As Family We Go Tour is Rend Collective’s second headlining tour, with their 2014 The Art Of Celebration Tour hitting 42 cities, with 29 sold-out dates.

The tour is in support of their latest project, As Family We Go. Released last fall, the album hit No. 19 on the UK Albums Chart and No. 9 on UK’s Digital Albums Chart, making it the highest debut for a Christian album in the UK in almost 20 years and the highest ever Christian album debut on the UK Digital Albums Chart. As Family We Go also hit the No. 1 spot on the iTunes Christian albums chart in the U.S., U.K., Canada, Australia and New Zealand and landed in the top ten albums overall in seven countries including the U.S., U.K. and Canada. Their current single from the album “Joy Of The Lord” is resonating with listeners, recently hitting the top 20 on the AC Indicator chart at radio.


Read our review of As Family We Go here

Buy As Family We Go on iTunes here