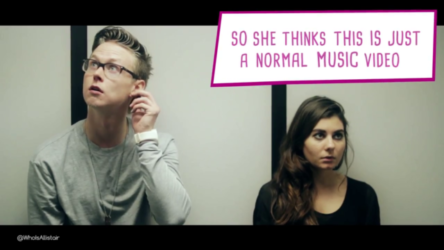 Allistair recently proposed to his girlfriend during a music video shoot for his song “Just A Little Bit”. We’ll let Allistair himself introduce this one…

I wrote a song about my girlfriend Amy, and proposed to her in the music video for it. She had no idea what was going on.

The song was written about her and the long distance that has constantly separated us. We’re currently living 800 miles apart, but that just gave me more time to secretly plan this crazy proposal.
So I invited Amy down to Nashville to play a part in a so-called ‘routine’ music video shoot.
We’ve dated for over 3 years, but never said “I love you” until now.
I’m Zander, and that’s Amy.
We hope you like it.

Read our review of “Just A Little Bit” here