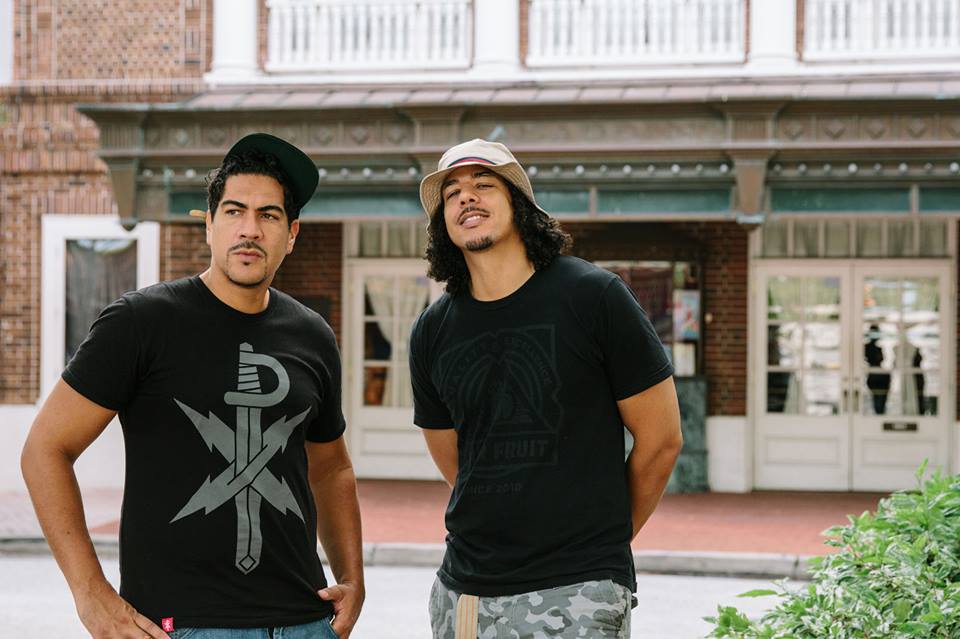 The Musicionary With Randy Mason Featuring Hazakim Of Lampmode Recordings

Lampmode recordings music group Hazakim and I talk Hip Hop, politics, and apologetics. CLICK HERE to check out their new release “Hands Up” By The Inklings (Hazakim & Jesus Peace).

We just try to present the truths of Scripture to the people in a most profound way.  We try not to speak over the heads of unbelievers but we’ve found that they appreciate the challenge.  Sometimes I think we assume we have to speak to them in a very generic way (both musically and theologically).  We’ve found that many of them appreciate the challenge of our message and the originality of our sound. As for the born-again listener, we feel there is not enough expository preaching from pulpits these days.  We put what we love in our music.  God’s people need the truths of Scripture to stand in this hour.  It’s been an honor to provide this in a musical way.

Very important, we believe.  Though it hasn’t manifested itself in recent years as much as in past years, hip-hop can be a difficult place to navigate, theologically.  Various doctrines and belief systems all swirling around in one place.  Many of us, by now, are aware of Jahaziel’s apostasy from the faith, for example.  He abandoned faith in Jesus for the deities of the “kemetic” Egyptian mythos.  This happened, I believe, because he was never grounded in Scripture.  I would say that for every believer, especially those who are engaged in the work of sharing the Gospel in any form, should have a grasp of Biblical interpretation and apologetics.

Thanks for the encouragement there man!  Yeah, we’re working a few projects right now.  We have a mixtape that we would like, Lord willing, to release this Spring.  A collaborative project with Jesus Peace from NYC, under the name “The Inklings” is also underway.  Just as a side, I would encourage everyone reading this to listen to the Inklings song entitled “Hands Up” on Lamp Mode’s soundcloud page…show us some love!  So that’s another project we’re currently on.  And finally, we have our sights on the next official Hazakim project this summer, Lord willing.  That’s a total of three Hazakim related projects this year.  We’re also going to be doing a bit of travel, including Israel, this May and June.  Anyone interested in joining us can holler!

Balancing family, congregational, and music life can be trying.  The key is to not make the first two suffer for the third.  At the same token don’t make the third suffer unnecessarily.  Don’t feel guilty if you are gifted artistically and desire to use it for Kingdom purposes.  Give it your all…do everything you do with your whole heart.

I currently serve as youth minister at my congregation.  Anyone involved with the youth in 2016 can tell you; this next generation is facing so many distractions and temptations.  So it’s a fight, but the Lord is our strength.

It can be very trying.  We have to remember that we are sharing Yeshua (Jesus) with the Jewish people after two thousand years of misunderstanding.  The religious leaders of Israel vilified Jesus.  The church has, for the most part, misrepresented Him as a gentile deity with blonde hair and blue eyes.  The fact that He was a native Israeli with great love for His people is lost.  Add to that so much of the doctrine that, despite being “lofty”, seeks to delegitimize God’s eternal promises to the nation (of scattering, but also restoration)….it can be difficult.  But when the Holy Spirit prepares the heart, nothing can withstand the Gospel.

In Israel we had the chance to pass out hundreds of outreach CDs and share with some people on the street.  They are more open now than ever.  Hip hop culture, by the way, is extremely prominent in Israel – especially Tel Aviv.  Knowing cultural etiquette and using tact can help as well.  Please keep the salvation of the Jewish people in your prayers.  Zechariah 12:10 tells us the day will soon come, when they recognize their King.  May it be in our lifetime.

Politics is a funny thing.  Depending on ethnic identity, many Americans (especially “minority groups” like African-Americans, and Jews) can have political loyalties that are hard to shake – even when said political party seems to do absolutely nothing in the favor of that group…so people get mad at me for not “towing the party line”.  I can’t definitively say who I am supporting, but I can tell you who I’m not supporting.  Hillary, and her ilk, are a hard pill for a lover of Scripture to swallow.  She essentially seems to love everything the God of Scripture hates, and she hates everything the God of Scripture loves.  The lobbies that champion her, are the lobbies that want to silence me…so I’m not a fan.  Trump, in my humble opinion, is nuts too.  He says a lot of things Americans want to hear, but says some things that are just outlandish.  He also has the habit of putting his foot in his mouth…but he doesn’t seem to care.  He just keeps talking with his foot in his mouth.  So scratch those two.  That leaves me with a very small pool of viable choices.  Honestly, I don’t really think it matters.  They already have the next candidate picked and it will be to fulfill their goals.  I’ve completely lost faith in the political game.  King Jesus for President of the world!

Mike and I grew up in Columbus Ohio and came up in the same era that a lot of great underground emcees from Columbus also came up – some of them were signed to Def Jux and Rawkus.  Rappers like Copywrite, Camu Tao, Illogic, & Blueprint –we were friends with a few of these guys and would bump into them all the time.  That underground influence has stayed with us all this time.

For us, we don’t claim to use our music as some sort of “hook” or “draw”.  The Gospel is sufficient to draw men.  We do hip hop music because it actually speaks to us musically.  Much the same way a guitar player plays his instrument or a drummer plays there’s – no real artistic motive other than “playing our instrument”.  As for the benefits of doing hip-hop in relation to our message..it allows for a broader range of lyrical expression than any other genre.  You can literally preach a sermon in hip hop.  Normative song formats are limited by rules of melody and structure.  Hip hop music allows the artist to say whatever they want to say.  In addition to this, the ”in your face” nature of this genre is perfect for presenting the Gospel.  Nothing can be more scandalous…more controversial, than the dying, rising, and reigning Messiah to whom we must stand in judgement.  I find that boasting on Him fits well over a hard hitting beat.  Haha!