Known for his dynamic live show, six-time GRAMMY® winner TobyMac and K-LOVE/AIR1 will present the talent-packed, multi-artist “HITS DEEP TOUR,” visiting over 25 markets in spring 2016. Leading the nationwide run alongside his DiverseCity Band, the multi-platinum selling artist will be joined by Britt Nicole, Colton Dixon, Building 429, Capital Kings, Finding Favour and Hollyn, promising a night of non-stop hit songs. Kicking off in Baton Rouge, La. on February 18, the “HITS DEEP TOUR” will run through April 10, ending in Moline, Ill. The tour’s theme and multi-artist package will undoubtedly make for some special moments on stage. For tickets and the most up to date tour information, click here. 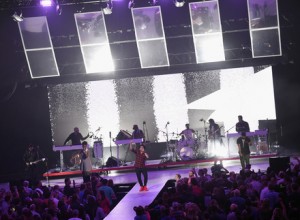 * All dates subject to change. Please click here for the most up to date tour information.

With more than 11 million units in career sales and a whopping six GRAMMY® Awards, TobyMac’s career continues on the fast track. His most recent studio album, THIS IS NOT A TEST garnered two GRAMMY® nominations and a high marking debut at No. 4 on the Billboard Top 200. Each one of his previous five studio solo projects have achieved Gold certification, a first for an artist in the history of his label, Capitol Christian Music Group. Among those honored with Gold certification, EYE ON IT, which debuted atop the Billboard 200, only the third ever Christian album to do so. His live DVD, ALIVE & TRANSPORTED, is RIAA Certified platinum and received a GRAMMY® award. His sixth solo studio project THIS IS NOT A TEST is now available.