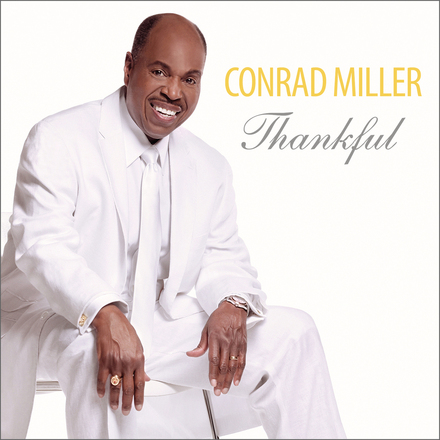 The general definition of a “gentleman” is a man who treats other people in a proper and polite way.  Conrad Miller is a gentleman of humble spirit and of distinguished character, and a man in servitude to God and His people.  His life of worship and desire to uplift others exudes through his music.

Conrad Miller is the Distinguished Gentleman of Traditional Gospel Music and he is starting the new year by releasing an all new album THANKFUL.

Conrad is devoted to the traditional gospel music genre, but, like most artists of longevity, has evolved through his twenty-year musical career.  With his THANKFUL album, Conrad is branching out offering Praise and Worship and Urban Inspirational songs in addition to his signature traditional sound.

THANKFUL includes the contemporary high-praise “Caught Up” single written and produced by Stellar Award winning songwriter Earl Bynum.  With the help of songwriter/producer Martin Luther Wardlaw (of The Wardlaw Brothers), Conrad is adding a touch of R&B under his old school crooning on the song “Raise Up”.  Wardlaw also produces “Save One For Me”, a quartet styled and straight up churchy tune that will become a favorite for traditional gospel music fans.

Noted songwriter and musician Garland “Miche” Waller also produces on the record and makes a vocal feature on the soulful track “So Good”.  Title cut “Thankful” is Conrad’s new radio single that he is now promoting on his first quarter media tour stopping first in Jackson, Little Rock, Memphis, Nashville, Louisville, Chattanooga and Atlanta this month.