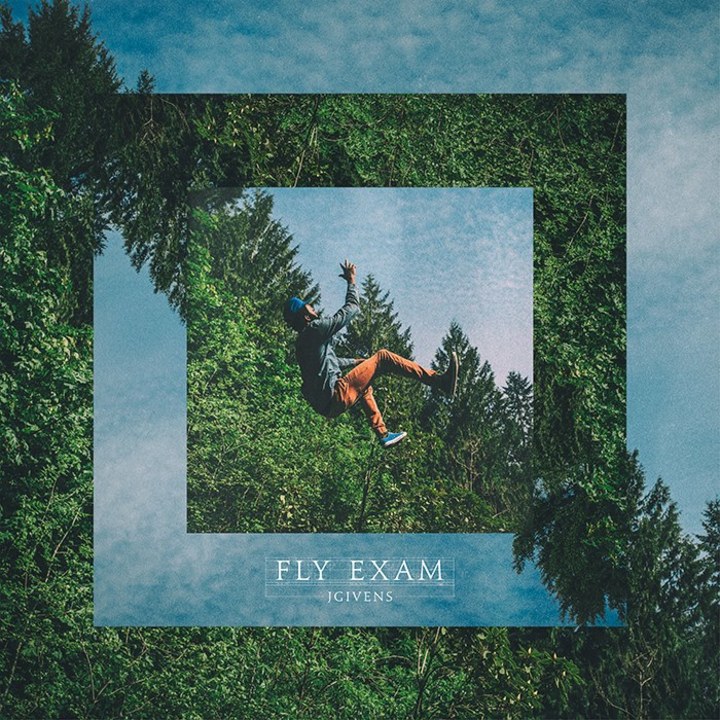 “I was listening to “Neverland,” the song by Andy Mineo, and when I heard Marz say ‘​So high I’ll never land,’​the first thing I thought is well, what if you do? How hard would you smack into the ground?” – ­JGivens (WadeoRadio Interview)

Humble Beast recording artist JGivens is rapidly rising in CHH as one of the most prolific lyricists in the game. His Humble Beast debut Fly​ Exam​ crash landed in ground breaking fashion in the fall of 2015, shaking things up with a sobering concept creatively engineered, and carefully crafted. The album experience unfolds more like a Disney Sci­fi than a traditional Hip Hop album, and the concept is loosely based on the Greek Mythological story of Icarus, flying too close to the sun. The Las Vegas native reinvigorates Hip Hop culture with a lyric centric style that draws from the golden era, but aims for the future. Fly​ Exam​ brilliantly begins prior to pressing play, as the cover art possesses a substantial part of the whole experience.

The album takes flight with “Ignorantro.” An aggressive battle rap­esque track where J flexes on emcees unapologetically over a suspenseful beat that drives boldly with a relentless kick. Lyrically, the song soars in an upward progression of lyrical prowess, and self­praise only to end in digital destruction. In the end, J seems to implode, like an overheated robot spinning out of control, incoherently rapping the last few bars before the song ends in smoke and ashes. Conceptually, the song highlights the harm of believing your own hype.

The next song is “Butterfly Stance.” Sonically, the transition between the two songs are seamless. “Butterfly Stance” feels like that moment in a movie when a bomb hits, and the surviving character stumbles out of the debri frazzled, with their ears ringing a deafening tone. It feels like walking home alone, under a cloud of shame. JGivens convincingly exits the doom caused in track one, and walks off the pain while pondering the high, it’s worth, consequences, and alternatives. Ironically this track features Marz singing “You ain’t gotta fly so high,” conveying the polar opposite sentiment of Andy Mineo’s “Neverland,” a song that helped inspire the Fly​ Exam​concept. Musically, and lyrically “Butterfly Stance” is a vacuum, sucking you into the story, and making you care about the main character.

Onward we go into track #3, “Fahrenheit 99” which features Liz Vice “Fahrenheit 99” (the temperature in which wax melts and relevant because Icarus’ wings were made of wax) further explores the pride of man, with metaphorical raps riding over reflective, deep movie monologue type music. By this point, you will have to be okay with missing a few lines, because JGivens systematically spews multi­layered lyrical imagery like an uzi, giving this record mega rewind​ value.

Next up is track #4, “So Fly,” featuring Beleaf from the Dream Junkies. “So Fly” picks up the pace, while still maintaining the ambient atmosphere that envelops the story throughout. On this track J & Beleaf trade boisterous raps as they rummage through the ruin caused by human ego.

Almost halfway through the album we arrive at “10, 2 Get In.” This ultra­-clever song features Odd Thomas of Beautiful Eulogy, and is maybe the most discussed song on the album due to the cutting edge technology used to film the music video. Go check it out below! This song uses the game of Dominos as a metaphor for Jesus fulfilling the 10 commandments in order for us to get​ in…​to heaven.

The next 7 songs continue the pattern of seamless storytelling, and feature appearances by Jackie Hill, John Givez, Propaganda, & Braille. Throughout the album, the musical, and lyrical/conceptual transition between songs is noteworthy. Imagine what it would sound like to hear a flower grow, that’s how Fly​ Exam​organically develops from track to track. The album features excellent production, mixing and mastering, by Daniel Steele, Courtland Urbano, Beautiful Eulogy, Odd Thomas, Braille and Anthony Cruz (Braille of Humble Beast is responsible for the mixing and mastering).

Noteworthy highlights on the 2nd half of the album are “Hummingbird Stance” and “They Said There’d Be Jetpacks.” “Hummingbird Stance” is a profound presentation of personification on the subject of suicide met with the most forward of message of hope on the album. Although the album is loosely based on the Mythological character Icarus, JGivens is clear in expressing that it reflects his own personal experience as well. One of my personal favorites is, “They Said There’d Be Jetpacks” featuring Propaganda. This is pure classic west coast Hip Hop, reminiscent of legendary groups like the Pharcyde. J & Prop going back and forth is just wildly entertaining. JGivens summarizes the entire album with this one line on “They Said there’d be Jetpacks,” “This is the inspiration of David/ how you figure we made it?”

Overall, Fly Exam is a well told story about the flight, and plight of humanity. It’s equally entertaining, as it is convicting. JGivens and Humble Beast once again raise the bar with this creative effort delivered in excellence. Speaking of creative and clever, an interesting side note is that the album dropped in Sept. of 2015, and features a few notable Star Wars references. Fly​ Exam​came out just months prior to the new Star Wars movie hitting theatres. Coincidence?