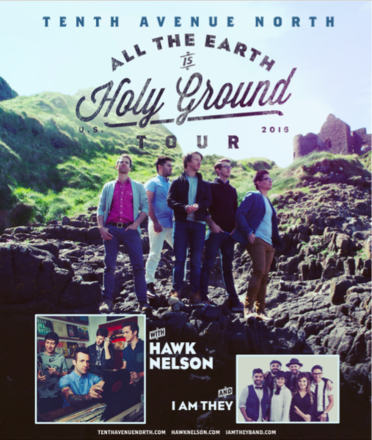 Tenth Avenue North announces their spring leg of the “All The Earth Is Holy Ground” with special guests Hawk Nelson and I Am They. The 30+ city tour, with more dates to be announced, is sponsored by Compassion International and will kick off on February 18 in Lake George, NY. This tour includes dates on the West Coast, the first time the band will head west since 2012. See the complete list of tour dates below.


This tour follows the successful fall leg with more than 53,000 people in attendance, over 1,000 Compassion sponsorships and will continue the message of Tenth Avenue North’s studio release, Cathedrals. This album is a collection of songs that inspire community, encourage accountability and celebrate the fact we are not alone. It is this release and idea behind the album that has inspired the title and theme behind the fall and upcoming spring tour.

“We believe that the dwelling place of God isn’t a building. It’s the people,” shares frontman Mike Donehey. “With that thinking, there’s nowhere that is a ‘secular’ place; the person’s mere presence makes it a sacred place. The idea is to fight the misconception there are ‘spiritual’ jobs and normal jobs in life. Our works don’t make us righteous, but our faith does. And works are a response to that gift. Thus whether you’re a pastor or plumber or lawyer, anything you do can be re-imagined as ministry if you do it to serve others and glorify God. And God’s spirit no longer dwells in buildings, but in us.”

Donehey, drummer Jason Jamison, bassist Ruben Juarez, keyboardist Brendon Shirley and guitarist Jeff Owen have forged a unique sound that has made them one of the Christian music’s most successful young bands. In the spring of 2014, Tenth Avenue North crossed the one million mark for records sold and continues to build its strong fan base by achieving more than one million likes on Facebook.