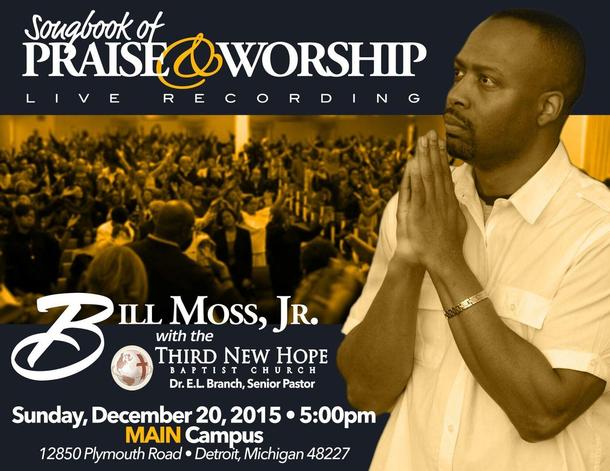 Detroit Songwriter and Musician Bill Moss, Jr. is gearing up for his live album recording THE SONGBOOK OF PRAISE AND WORSHIP.  The noted Gospel artist and Worship Pastor will present this much anticipated and high-spirited evening of gospel and worship music at Third New Hope Baptist Church in Detroit, MI on Sunday, December 20 at 5PM.  The recording event is free to the public and everyone is invited to attend.

As a member of the talented Moss family, who’s legacy has established them as gospel music royalty, Bill and his younger brother, J Moss began recording together in their youth as The Moss Brothers until Bill began to pursue his college education. Bill released a solo project, MANIFESTED FAVOR (2008), which debuted at #27 on the Billboard Top Gospel Chart.

He is the Worship Pastor at Third New Hope Church, (Dr. E.L. Branch, Senior Pastor) and is the founder of the Moss Academy of Music, where students receive private music lessons in piano, drums, vocal, guitar and organ.  This allows Bill to develop young musicians and continually share the gift of music with the Detroit community.