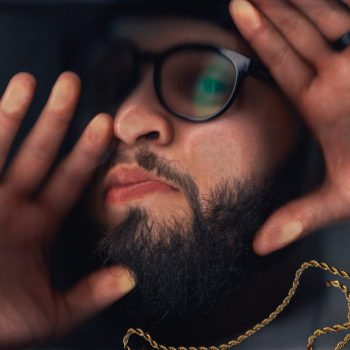 Reardon Auditorium. This Anderson venue is typically associated with undergraduate chapel, but for an hour this past Friday night, the auditorium transformed into an electric concert hall. What would have been just an ordinary opening night of a youth conference became more than just ordinary thanks to Christian hip-hop artist Andy Mineo. Fresh off the heels of his Uncomfortable Tour, Mineo’s latest stop was a one-off in the central Indiana city an hour northeast of Indianapolis.

Mineo began his set with “Uncomfortable,” the title track from his newest studio effort and namesake for his recently-finished tour. From there, he showed the throng of teenagers and young adults what it’s like to be “uncomfortable,” why that’s a state Mineo strives for, and how he does so through his music. Black Knight’s drum work throughout the entire set was phenomenal, but Mineo was sure to showcase his beat master and not just let him stay quietly in the background, specifically at the end of “Desperados,” and again to close out the set.

On a few occasions Mineo’s goofiness shined through, such as the times he rode a balance board across the stage or played around with his vocal effects box. On the other side of the spectrum, Mineo had his fair share of serious moments as well, most notably when he spoke briefly of his deaf sister to preface the song inspired by her, “Hear My Heart.” Together, however, the two staunchly different moods complemented each other quite well. Among the other highlights of Mineo’s hour-long set were “Paisano’s Wylin” and “You Can’t Stop Me,” along with “Lay Up.”

Overall, Andy Mineo put on a great show suitable for all ages, with enough comedy to keep everyone entertained but at the same time enough purpose to justify being there in the first place, no matter one’s age. As a result, it’s no surprise that Mineo is one of the premier names right now in Christian hip-hop.