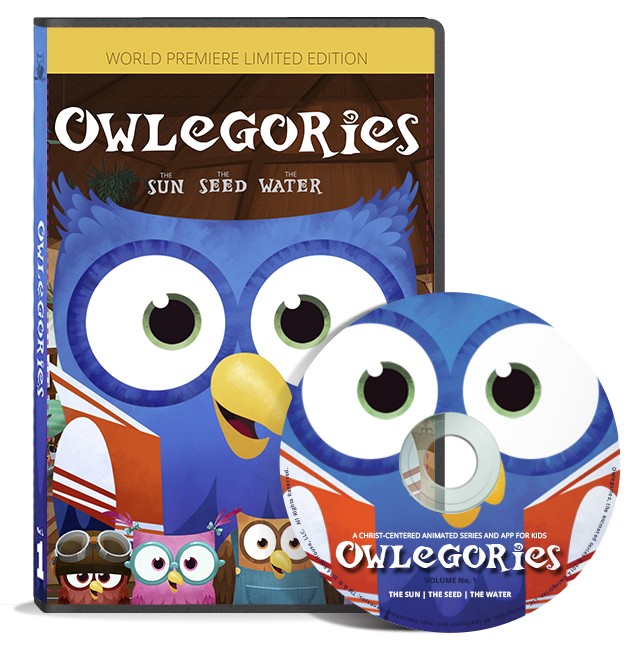 Owlegories Vol. 1 — The Sun, The Seed, and The Water Lands on Best-Seller List at Walmart.com

The opening week following the October 20th launch of the Owlegories™ animated series and digital app from Spy House Productions and Gundersen Entertainment proved to be a significant week for the brand. Securing a position on the best-seller list at Walmart.com, temporarily selling out at Amazon.com and landing as the second best-selling new release at Christian retail, Owlegories™ Vol. 1 – The Sun, The Seed, and The Water is finding favor among the critics.

“My boys loved this. There’s nothing like your kids watching something that’s not only entertaining but is instilling good stuff into their little hearts. And I really enjoyed watching it along with them – It’s super cute!”

“Owlegories is the hottest new product for kids and families that I have seen in some time. It’s perfect for churches, schools and homes. They are engaging videos that teach children important truths!” – Ryan Frank – CEO & Publisher, KidzMatter / Vice President, Awana

“The whole family will enjoy watching the adventures that Professor Owlester sends Joey, Nora, Violet, Gus, and Twitch on as they discover the love of God together!” –  ChristianCinema.com

“Let the colorful, delightful animation, catchy tunes and Gospel-centered messages make their way into your shopping cart and your kid’s hearts today…I was very impressed with the entire program from the effort put in behind the scenes to what we see on the screen from beginning to end…Seriously, the cuteness just doesn’t stop.” – HollywoodJesus.com

“The characters are so rich and fun…It’s designed for preschoolers and really younger elementary school age kids, but I find myself just drawn in…I’m so excited it’s coming to DVD…” – Life with Purpose Radio


“I have fallen in love with Owlegories…Very powerful messages for children during a time in our culture when cartoons turn them away from God…My children said it best, ‘This is awesome, cool, amazing and I love it.’” – Parenting Tips 2 Go w/ Dr. Stacy Haynes

“This series is great for young children with plenty of laugh-out-loud moments for the inner child of every adult…it will keep adults engaged, and kids will want to watch this show over and over.” – AFA Journal

“I love how each lesson features something about nature that teaches children about the characteristics of God’s character and important truths from his Word. I found each episode very child-friendly and charming.” – FIVE STAR Books & MORE by The Reading Mom Newsletter

Beyond the reviews, co-creator/co-director/executive producer Thomas Boto (and the voice of “Twitch”) recently spoke with The Baptist Press about the launch of the series. “There are times when parents are going to need kids to be entertained…So this is a great, safe way for children to watch for a short time and still be fed by God’s Word.” Boto also said his aim is “good, wholesome, funny and educational content” for churches and families. For the full story, visit http://www.bpnews.net/45703.

Also featured in the November issue of CBA Retailers+Resources, Boto notes, “We talk about Psalm 19:1 all the time…It stirs our affection for Christ when we see all that He has created and His amazing attention to detail. That’s what we try to communicate to our kids. ‘Look around, this is amazing. You’re here for a purpose, for a reason, you were created by God and God then gave you the power to go out and create for yourself.’ Kids love to create.”

In addition to the Vol. 1 DVD series and interactive app, which VitalMagazine.com calls “An ‘Owl’-Star App for Kids,” Owlegories will offer a fun, effective and interactive way to help young children memorize God’s Word with the release of the Owlegories Memory Verse app coming later this year. Furthermore, Owlegories TV may be downloaded now as an app to any tablet or smartphone to watch the latest episodes and has just been made available for Android users to enjoy as well. Families are already asking for Owlegories Vol. 2: The Ant, The Fruit, and The Butterfly, which releases on February 9, 2016.

In support of the launch of Owlegories Vol.1, Thomas and Julie Boto, along with their four boys, fans and friends, celebrated release day at the local Chick-fil-A in the Dallas area. Pictured at the “Chick-fil-A Kids Night” in Keller, Texas, the DVD was promoted via in-store posters, coloring pages, activity sheets, t-shirts and DVD giveaways.

Owlegories is a new animated series and interactive digital app that teaches kids about God through the amazing things found in nature and revealed in God’s Word. Thomas Boto and his wife Julie, with the help of their four young boys, are the creators of Owlegories and the original interactive storybook app on which the animated series is based. “You can tell a lot about an artist by what he creates” is the premise behind Owlegories. Taking inspiration from the series banner verse, Psalm 19:1-4, Owlegories addresses the important theme of creation and explores the nature of God as the Creator of the Universe through the use of allegories, metaphors and analogies. The animated series was brought to life with the help of producer Chad Gundersen and co-writer/co-director Keith Alcorn, co-creator and executive producer of Jimmy Neutron: Boy Genius and The Ant Bully.  For all the latest information on Owlegories and the launch of Owlegories Vol. 1 – The Sun, The Seed, and The Water, go to http://www.owlegories.com/, https://www.facebook.com/Owlegories and https://twitter.com/Owlegories.