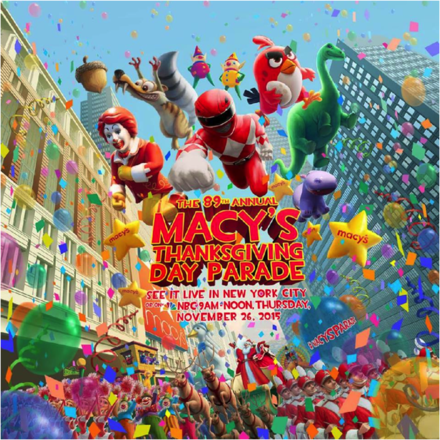 Current American Music Award nominees MercyMe will appear on the 89th Annual Macy’s Thanksgiving Day Parade, live from New York City on NBC. With an expected 3.5 million spectators along the route and 50 million viewers tuning in, the parade will air from 9am-NOON on Thanksgiving Day, November 26th. MercyMe will join such notable talent as Mariah Carey, Cirque du Soleil®, Pat Benatar and more for what has become one of America’s favorite holiday traditions.

Just prior to heading to NYC, MercyMe will perform during Atlanta’s Annual Great Tree Lighting at Macy’s Buckhead Lenox Store before a crowd of nearly 45,000. The event will be broadcast live on WSB Atlanta (ABC), with subsequent replays over the course of the holiday weekend.

The Christmas season started early for MercyMe this year when MercyMe, It’s Christmas!, the band’s sophomore Christmas offering, debuted at No. 1 on Billboard’s Holiday Albums chart, just following the RIAA Gold certification of their 2011 project, The Generous Mr. Lovewell. MercyMe’s hit single “Flawless” has been No. 1 for 11 weeks and counting on the Billboard Christian AC Chart while also topping the Billboard National Christian Audience Chart.

After the band wraps their “Greater Than Tour” in mid – November, they will head out for a special run of Christmas shows. For more information on the tour, visit mercyme.org/tour.