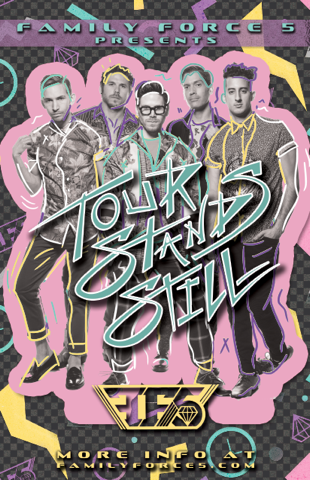 The Cleveland House of Blues was transformed into a dance club on an otherwise ordinary Monday night in October when Family Force 5 hit the Cray button and encouraged everyone to “dance like no one was watching.” And dance they did.

Opening bands Vesperteen and Born Cages did an excellent job of warming up the crowd. Both bands were very engaging, and judging by the smiling faces in the crowd, were very well received.

Family Force 5 finally approached the stage amidst many cheers, the subtle background music only serving to amp up the energy buzzing through the crowd. Once each band member had taken their place, the music began to increase in speed and volume until they launched into “Time Stands Still.” The dance party had begun, and did not let up the entire evening.

In their own unique way, Family Force 5 lightened the mood of everyone in the room, young and old. Their infectious beats and catchy melodies are all infused with a message of love, and the joy on the faces of each band member is quite contagious.

Not only does Family Force 5 put on an entertaining show, but every single one of them are incredibly talented, and they certainly showcased their skills. At one point during the night, Crouton, former drummer and current lead singer, jumped onto a second drumset to trade beats with drummer Hollywood. Keyboard player Nadaddy even got in on the action, grabbing a mallet and attacking a stand-alone bass drum. Not to be outdone, Chapstique wailed on the guitar, his solos performing a funky dance with the solid bass grooves radiating from Fatty’s bass.

In addition to the superb display of musicianship, the on-stage dancing and interaction was incredibly fun to watch. Chapstique was all over the stage and in audience members’ faces. During one of the songs, Crouton hopped the small barrier to mingle with the crowd and encourage audience participation, even sharing the mic with a few brave individuals.

All of the fan-favorites were played, keeping everyone moving the entire time. The band teased with the intro of “Ghostride the Whip” only to break into “Jetpack Kicks,” transitioning back to “Ghostride” to wrap it up. The crowd got to “Wobble” and break out their claws for “Zombie.” They even got “Supersonic” and went “BZRK” when Crouton hit the “Cray Button.”

After thanking everyone and walking off stage, Family Force 5 was summoned back with chants of “one more song.” The crowd got more than they anticipated when the band threw in a bonus, brand new song titled “Sweat Band.” After that song ended, the crowd demanded to hear the ever-popular “Chainsaw,” and Crouton had quite a bit of fun teaching everyone how to get their ‘bows to their knees, and consequently crank it like a chainsaw.

Family Force 5 may be all about providing people with a night of care-free fun and dancing, but behind every clever lyric and addicting melody is a heart to meet people where they’re at, and the band’s chosen approach opens the door to do just that. After the show, they hung out at their merch table to meet and greet all who wanted to say hi or share a personal story. Family Force 5 is a unique band, comprised of authentic men of God, and their live show is something that everyone should experience. The world could use more people and moments such as these.