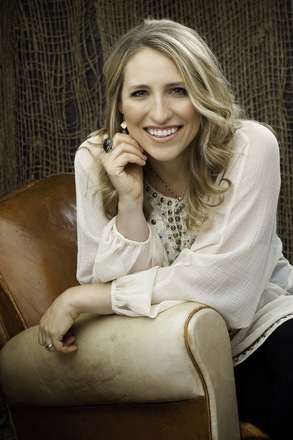 Laura Story was honored on Tuesday night at the 46th Annual Dove Awards with the Inspirational Song of the Year award for “O Love Of God.” Written by Story, Cindy Morgan and Ian Cron, the song is featured on her 2013 release God Of Every Story. The awards were hosted by Sadie Robertson and Erica Campbell and took place in Nashville at Lipscomb University.

“I’m so honored for the Dove Award win for Inspirational Song of the Year,” Story said. “My gratitude overflows for those who partner in ministry with us. Thanks so much!”

“Thrilled to be a part of the FairTrade family as Laura Story, Ian Morgan Cron and myself accepted the Dove Award for Inspirational Song of the Year for ‘O Love of God,'” songwriter Cindy Morgan added.

Story’s debut Christmas album God With Us released October 9. A mix of old, familiar classics (“Angels We Have Heard On High”) and (“O Come All Ye Faithful”) along with brand new originals (“Just Another Christmas”), listeners can expect to hear full, intricate songs as a 120-voice choir and a 50-piece orchestra accompany Story on several tracks. Additional collaborations on God With Us include multiple GRAMMY® Award winner Steven Curtis Chapman and Emmy Award winner Brandon Heath. God With Us is available now on iTunes and Amazon.


About Laura Story
GRAMMY® award winning artist, speaker, songwriter, author and worship leader Laura Story has a gift for penning songs that connect with people all around the world. Among her successes as a solo artist with her smash hits “Mighty To Save” and “Blessings,” Laura has also penned hit songs for other renowned artists including Chris Tomlin’s “Indescribable.” Her solo artist music debut in 2008 with Great God Who Saves led to four Dove nominations and the award for “Inspirational Album of the Year.” In 2011, Laura released her sophomore project Blessings. The album and the emotionally powerful title was inspired by her real life trials and adversities, primarily her husband Martin’s diagnosis of a brain tumor. The album resonated with a huge audience and led to whirlwind career highlights for Laura, peaking at the No. 1 album spot for three consecutive weeks on Billboard’s Contemporary Christian Overall chart, topping the iTunes® Christian/Gospel Top Songs chart and holding the No. 1 spot for an impressive 28 consecutive weeks on the Christian charts. The success of the single “Blessings,” which was certified RIAA Gold, includes the GRAMMY® Award for Best Contemporary Christian Song, the Billboard Music Award for Top Christian Song and the Dove Awards for Song of the Year, Pop/Contemporary Song of the Year, Pop/Contemporary Album of the Year and Songwriter of the Year. The song inspired Laura’s first book, “What If Your Blessings Come Through Raindrops?” in 2012. Her latest project – God Of Every Story – released in 2013 to much acclaim, and her first ever Christmas project God With Us, is set to release in October. Laura is a worship leader at Perimeter Church outside of Atlanta, GA and lives with her husband Martin and three children.