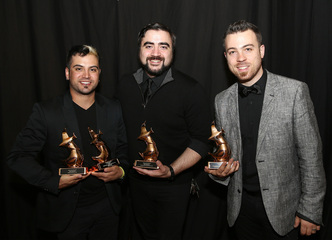 Nashville-based Full Circle Music, helmed by Seth Mosley, took top honors at the 46th Annual GMA Dove Awards, garnering four wins, including Producer of the Year, Songwriter of the Year (non-artist), Pop Contemporary Album of the Year for Run Wild. Live Free. Love Strong. (producer) by for KING & COUNTRY and Inspirational Album of the Year for Above It All (producer) by Phillips Craig & Dean. Mosley was a five-time nominee for the sold-out evening, which took place on October 13 at Lipscomb University.  In it’s 46th year, the show will air on the Trinity Broadcasting Network (TBN) on Sunday, October 18, 2015.

“This is a special moment for me and our Full Circle Music team,” shares Mosley. “These awards are a beautiful reminder to us when we come to work how these songs are making it out of the 4 walls of our studio and into people’s hearts. We are fortunate to work with such great artists who make what we do possible. The keyword here for us is gratitude.”

About Full Circle Music:
Under the leadership of GRAMMY®-winning producer and songwriter Seth Mosley (SESAC Writer of the Year 2014, Billboard No. 1 Producer 2013), Full Circle Music is comprised of a team of producers, engineers, songwriters, editors, studios and creators that work with both signed and independent artists. With 20 No. 1 singles and credits including Mat Kearney, MercyMe, TobyMac, Jon Foreman (Switchfoot), Sidewalk Prophets, Newsboys and country acts like High Valley, Ricky Skaggs and more, the Full Circle Music team offers a wealth of combined experience from multiple genres including pop, Christian and country.