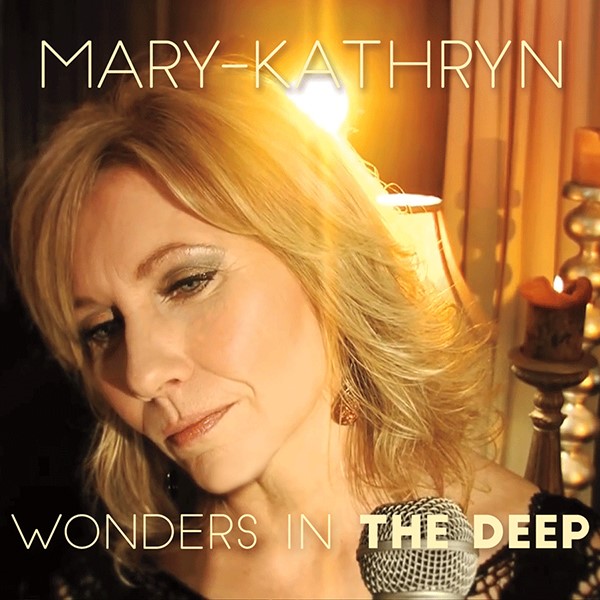 On her fifth album, Wonders in the Deep, singer/songwriter Mary-Kathryn blends elements of soft pop and folk with World Music influences as diverse as the continents to create a spiritual amalgam that transcends musical boundaries. Sophisticated without being elitist, understated without being simplistic, Mary-Kathryn displays an emotional depth that can only be described as ethereal.

Wonders in the Deep, released online in March 2015 from Rhythm House Records and quickly climbed to #7 on the Zone Music Reporters Top 100 chart. The project will release to the Christian market Fall 2015.

With Wonders in the Deep, Mary-Kathryn delves deep into the world music realm, painting word pictures on an aural canvas with exotic instrumentation, adroit production, and lyrics that stir the spirit and excite the imagination. As one Billboard Magazine reviewer so aptly put it, “the most affecting instrument…is Mary-Kathryn’s lovely voice.”

Just as One Spirit captured the attention of the popular and rapidly-growing “New Thought movement,” her follow-up project, Dreams & Visions, solidified Mary-Kathryn’s position as a unique voice in the genre. Now, with Wonders in the Deep, Mary-Kathryn has emerged as one of the few artists in the World Music genre capable of transcending cultural, spiritual and linguistic barriers to express universal truths about the human experience.

The result is an album that feels tactile, textured, woven rather than layered. It sounds like fabric would feel; it looks like color would sound. It has to be experienced, rather than simply “listened to.”

“As with any language that is sung, you don’t have to understand it to enjoy it,” Mary-Kathryn explains. “The sound and the Spirit is what matters, and the music is just as important in communicating the message as the words. The music itself is speaking. Wonders in the Deep is part of the evolution from where I first started. I was heavily influenced by Enya’s music at the beginning of my recording career. I felt her music had a very spiritual aspect to it. But as time passed, I found myself drawn to music that is more rhythmic, more World Music-influenced. Wonders in the Deep is more guitar-driven than my previous projects, and we use more live strings–cello, piano, mandolin. For me, sound is color, a voice that is speaking beyond words, so when I’m creating and recording I’m very intentional about the sounds I choose. People tell me my music is visual, experiential. I couldn’t ask for more.”

“Hear My Cry,” the opening number of the 10-song album, begins a capella, relying solely on Mary-Kathryn’s fetching vocals to engage the listener, before segueing into driving, rhythmic percussion and understated strings. Contemporary Latin rhythms and mesmerizing, mystical melodies accentuate “Beyond” before slipping peacefully into the lovely and pensive “Deep Calls to Deep,” a classic example of Mary-Kathryn’s singular ability to combine earthy instrumentation with ethereal vocals to produce a visceral, vicarious spiritual encounter.

“Ships” is another song that combines emotive, intuitive instrumentation with atmospheric vocals to create an experiential environment. You can almost feel the sea spray washing over the sides of an ancient galley. The song segues appropriately enough into the Middle Eastern-influenced “Mediterranean Passage.” Mary-Kathryn points to “Elohim,” a song she co-wrote with Paul Buono, as one of the most personal songs on the album.

“We wrote the melody first, and the lyrics came after,” she explains. “I love being inspired by the music. It felt like a prayer, like intercession. I had been impacted by the film Slumdog Millionaire, and it gave me a burden for the oppressed peoples of the world. ‘Elohim’ is one of the Hebrew names of God, and this whole song is a heart’s cry, a prayer that God will minister to the needs of the oppressed.”

The acoustic guitar-driven “Nathanael’s Song” skirts familiar contemporary Americana territory, while tapping into extraordinary vocals that Mary-Kathryn uses to express emotions that are too deep for mere words. “Where Can I Go” melds sweet piano with synth, strings and percussion to create a moody, alternately melancholy and ecstatic musical environment, while “Into The Heavens” combines Arabic tones with Occidental melodies, resulting in a mesmerizing World Music experience. Mary-Kathryn draws on her own Christian spiritual heritage to imbue “You’re With Me” with sacred impetus. “I see you where I am, and I know You are with me,” she sings. “I don’t have to fear; You’re with me.”

“Our culture tends only to live in the here and now, while ignoring the vast ‘ocean of the deep’ that is the spiritual,” Mary-Kathryn muses. “There is so much more that God wants to reveal to us.”

Singer/songwriter Mary-Kathryn is from San Antonio, Texas where she began her music career with debut album, Perfect Gift in 1995. Her second album, Stream in the Desert, released on Rhythm House Records label in 1998. One Spirit followed on October 31, 2000 with Mary-Kathryn and her band touring much of the U.S., and her fourth album, Dreams & Visions, released on August 21, 2007, receiving a first-round Grammy nomination. Mary-Kathryn’s latest project, Wonders in the Deep, released online in March, 2015 from Rhythm House Records and quickly climbed to #7 on the Zone Music Reporters Top 100 chart. The project will release to the Christian market Fall 2015.

For more information about Mary-Kathryn and Wonders in the Deep, visit mary-kathryn.com.