The GRAMMY-nominated band Building 429 released their new studio album, Unashamed, September 25 with Essential Records. In its first week, Unashamed debuted at No. 2 on Billboard’s Contemporary Christian Chart and has surpassed the sales growth of the band’s 2013 release, We Won’t Be Shaken, by an astounding 20%.

Much critical acclaim has come in since the release of Unashamed. With an upcoming CCM Magazine cover story, a review in Charisma, they’ve also been covered within Guideposts online, American Family Radio, CBA Retailers + Resources and more. The band also performed a new song during street week on Nashville’s NBC hit show “More At Midday.” Here are a few key reviews praising the album:

“Building 429 has done it again. They’ve always put out great, heart-filled music for all ages, but  Unashamed is definitely one for the history books. Their sound has always been something different and their uniqueness is undeniably evident on this release.” – The Christian Beat
“One of Christian music’s surest bets…..Given the tremendous success of Building 429’s last few albums, it’s hard not to project the same for Unashamed.” – CCM Magazine
“Unashamed is the band’s best work yet, and a testament to their longevity and their relevance.” – 365 Days of Inspiring Media
“Overall, the album’s music will lead our worship by taking us another step out of our comfort zone to dance. And with the lyrics corresponding with the theme, it will sure help connect us in worship.” – Christian Concert Alerts
The new single from Unashamed, “Ocean Deep,” was touted as “…an absolutely beautiful and soul-stirring declaration of the power of God’s relentless grace…” by Jesus Freak Hideout. “Ocean Deep” just hit radio last week and can be heard on stations across the country. The album’s first single, “Impossible,” made label history this spring by receiving an astounding 95 radio adds on its add date.

An amazing view from last weekend at Dallas’ Women of Faith conference, featuring Building 429
(photo courtesy of Women Of Faith) 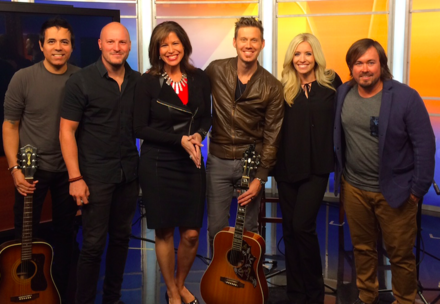