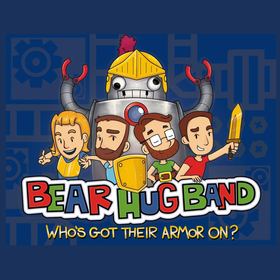 The goofy quintet of musicians and singers known as Bear Hug Band is releasing a new album for children on October 2nd titled Who’s Got Their Armor On? This is the third release from the band but first release partnered with Super Big Robot, a Christian music label for younger audiences and their families.

“Our prayer is that the loving heart of God would be evident to all who come in contact with these songs,” shares band member Jake Rowley, “The love Jesus Christ has is furious, strong, and never ending. No matter who you are, how far you think you have fallen, or how distant you feel from him, Christ’s love is the same today as it was yesterday.”

Described by the band as “a healthy mix of dancing and comedy,” Justin Chavez (drums), William Funderburk (guitars & vocals), Joel Jurekovic (bass), Jake Rowley (vocals, fly dance moves and hand motions) and Desmond Sheehan (keys) travel around the world with a treasure chest full of silly songs, funny jokes, costumes and the occasional pantomime routine. Inspired by Colossians 3:16, which encourages believers to teach and admonish each other with psalms, hymns and spiritual songs from the Spirit, the Bear Hug Band has stayed on course, laughing dancing and singing kids of all ages all the way to Jesus.

The guys of Bear Hug Band met in 2006 while attending Calvary Chapel School of Worship. While working on a worship song one evening, the tune took an unexpected turn, which has led them down the path of writing and performing gospel-centered songs for the young and young at heart. With their album Who’s Got Their Armor On? in the hopper for release on October 2nd, and tour dates in the works for 2016, the Bear Hug Band is thrilled to continue introducing the young and adventurous to their loving Creator.

“Ultimately, the most rewarding part of ministering with the band is knowing that God can use something so goofy to build His kingdom. It is so clear that God is the one working and ministering, and we often feel like we have nothing to do with it,” shares Jake, “The fact that God would use the music to help kids see and understand the gospel of Christ is an indescribable feeling and beyond our understanding. After all, it’s his work of ministry and reconciliation, not ours. All we can do is just send the music out into the world and watch Him work! So, it’s amazing to see God do big things out of something so small.”
Stream “Big Big Love” here: