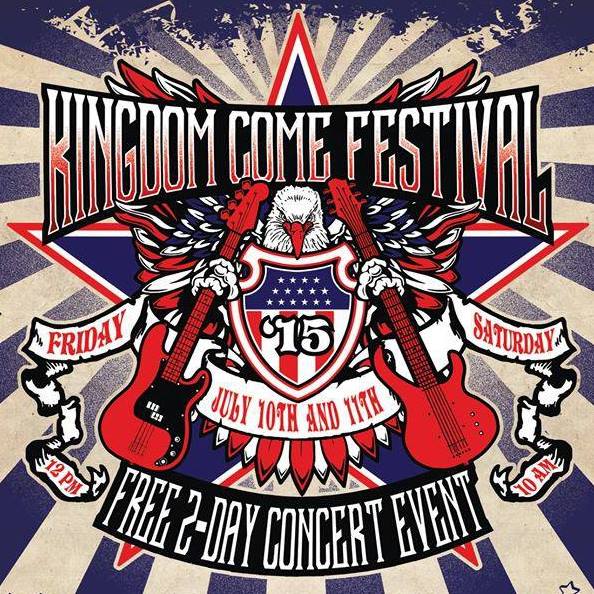 The Kingdom Come Festival, located in central Indiana, is truly one of a kind. It is a free festival that includes some awesome local bands, as well as some incredible nationally known acts. The folks at Always One Ministries (A1M), an Indiana based non-profit, genuinely strive to put God first in all that they do. A1M is dedicated to reaching the lost and hurting though concert outreach events. They recognize the power of music to speak to people, many of them having experienced life changing moments at concerts at some point in their own lives. And because of their dedication to their mission, they are committed to bringing in artists who share the same convictions. Many of the artists who participate in this festival have personal stories of how someone at A1M had a great impact on them, or how God used an A1M event to bring about change in their lives.

Even though this was Kingdom Come’s sixth year, because of a change of location, this was the first year that they were able to offer the option of camping. This year, the festival was held at the Howard County Vietnam Veterans Organization. These veterans welcomed A1M and the Kingdom Come Festival into their beautiful campground with open arms. Several of the bands camped out for both days of the festival, allowing for a considerable amount of interaction with fellow bands and concert goers alike. This is one of the many things that makes Kingdom Come so special. We are all part of God’s big family, and at this festival, it matters not whether a person is an accomplished musician, construction worker, bank teller, or high school student. The playing field is level, and everyone is accepted and welcomed. And many times throughout the weekend, A1M members, band members, or even entire bands could be seen praying with those in attendance.

One such story comes from Sarge, guitarist for The Protest. He and one of the members of security were in a golf cart on their way to check on one of the A1M members when he saw a young woman sitting in the grass, all by herself, so he asked to be taken back. Sarge sat down and introduced himself, letting her know that it was alright to talk to him about anything. It took a while for her to open up, but she eventually admitted that she had spent most of the previous day sitting alone at a picnic table, wanting to talk to people, but too nervous for various reasons. This God-appointed encounter with Sarge was just what she needed, and it let her know that it was safe to share her story. She spoke of a story filled with pain and sadness. At the end of their conversation, Sarge prayed with her, asking God to bring about healing and change in this young woman’s life, and that she would not leave the festival the same. The change was almost immediate. Her mood lifted, and there was a spring in her step.

Spoken word artist Egypt had a similar encounter. Egypt was not even scheduled to speak at the festival, but was there to see We As Human, one of her favorite bands. After learning that she was there, A1M members asked if she would be willing to speak that afternoon. After speaking God’s word of encouragement in a creative and poetic way, and letting people know that God can use anyone to bring about change in this world regardless of age (she’s seventeen), a woman approached her and began to tell her story. She had a stressful family situation, and was a little nervous to return home, not knowing how things would turn out. After sharing her story, Egypt prayed with this woman, asking that God would fill her life with His presence and let her know that He has everything under control. The woman left the conversation with a sense of peace and calm, confident that, with God’s help, her family situation would improve.

And the encouraging stories didn’t stop with the artists. Photographer Jeanette was taking pictures of every band during their first several songs, and then returning to her laptop to post a few of the best pictures directly to the Kingdom Come Facebook page in an effort to update the folks at home and encourage more people to venture out and experience the festival. Several friends and A1M members made the time to visit her in her photography “cave,” asking if she needed anything and just spending some time with her. Those moments were what kept Jeanette going throughout the weekend. Stories such as all of these, as well as the many untold stories, are what set Kingdom Come apart from other festivals of its kind.

There were a variety of bands performing, with something to speak to just about everyone’s taste in music. The bands ranged from pop to Southern rock, R&B to metal, and just about everything in between. It was certainly not out of the ordinary to hear musicians sharing from the stage their own stories of hope and forgiveness and God’s faithfulness. David, the lead singer of Children 18:3, even paused for a moment between songs because he felt that God had laid it on his heart to pray for anyone with throat and neck problems.

In addition to the wonderful atmosphere and air of God’s presence, the musicians were all on top of their game and gave everything they had up on the stage, energizing and inspiring everyone within earshot. Friday night headliners We As Human even debuted a couple of the new songs they have been working on. Just before We As Human was set to perform, a thick, heavy mist could be seen cascading across the stage. The fog, in addition to the eerie music playing, only added to the suspense and anticipation. A moment later, Justin Cordle’s intense voice began to emanate from behind the wall of clouds. Soon after, the fog dissolved and the band kicked in, sending the energy in the place skyrocketing. And the energy level did not let up for the remainder of their set. Justin did stop for a moment between songs, reminding people of what seems to be their band motto, that they are a bunch of no ones going around telling everyone about Someone. The new songs were received quite well, and crowd participation throughout the night was high. After bringing the first night of the festival to a spirited close, the guys of We As Human headed back to their merch table and stayed there for as long as it took to meet and take pictures with everyone that wanted to.

Day two of the Kingdom Come Festival was just as incredible as the first, though bands started playing earlier, so the day was even more packed with music. It was only appropriate that A1M chose The Protest to headline the final day of the festival, a band that seems to be the embodiment of all that A1M stands for. As dusk began to settle, dark rain clouds threatened the horizon. Many a prayer was said, and even though there were a few moments of light sprinkles, the rain skirted the campgrounds.

The Protest certainly made quite an entrance. As the crowd eagerly awaited the band to take the stage, a familiar tune started the play. The Chicago Bulls theme song from the ‘90s began to pulse through the speakers, getting the crowd hyped up, the anticipation building. One by one, each band member was introduced, running out onto the stage, met by cheers and whistles. After a quick huddle, the band launched right into “Control,” the searing guitar licks setting the tone for a thrilling night of music. The band was completely on point the entire night, beats and riffs flowing seamlessly together. They seemed to feed off of the crowd’s enthusiasm, spurring them to an even greater performance. Lead singer Josh further engaged the crowd by jumping off the stage and interacting with the folks in the front row.

As is their tradition, they took a few moments during their set to speak, though in a slight break from that tradition, it was Sarge that stepped up to the mic, rather than Josh. He had recently been playing a video game when he felt like God tapped him on the shoulder and pointed out a little piece of truth and inspiration. In this game, whenever the main character would get injured, he would be able to be healed by finding sources of light, whether it be flash lights, batteries, or street lamps. In life we will all get hurt at one point or another, and Sarge encouraged us as Christians to be a source of light, shining the love of Jesus Christ to the lost and hurt and broken around us. This was a great reminder that inspiration can be found anywhere if we keep our ears open for the whisper of God’s voice.

The Protest played several more songs, ending the festival with a bang. As soon as the last note was played and the band exited the stage, the crowd began to chant for one (or three, depending on who you were listening to) more song, and the band didn’t disappoint. They returned to the stage and finished out with “It Doesn’t Matter,” an old favorite. The Protest also spent quite a while at their merch table, meeting with people and taking pictures.

Between the loving and encouraging atmosphere, excellent music, and sense of God’s presence, the Kingdom Come Festival is not to be missed. It is most certainly a light in this dark world, pointing our eyes and hearts toward heaven.