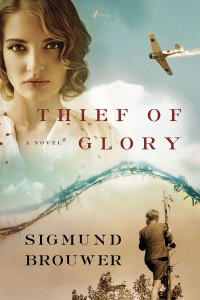 Thief of Glory, the latest title from best-selling novelist Sigmund Brouwer, was recently named Book of the Year at the 16th annual Christy Awards for excellence in Christian fiction. Published by WaterBrook Press, Thief of Glory also took home honors in the Historical Romance category.

“I wrote Thief of Glory as a way to honor my father’s boyhood story,” said Brouwer. “During World War II, when my father was 6, he and my grandmother, along with his siblings, were imprisoned in a concentration camp in the Dutch East Indies. Guarded by Japanese soldiers, they were held for three years, until the Japanese surrender ended the war in the Pacific—70 years ago this month.”

“What made the Christy Award acknowledgment more poignant was that my father had passed away only a week before the announcement,” Brouwer continued. “I am grateful for the recognition that Thief of Glory has received, and hope the book may continue to encourage readers to learn and cherish the stories of their loved ones.”

Donna Kehoe, executive director of The Christy Awards, remarked, “(The judges) commented that the Book of the Year, Sigmund Brouwer’s Thief of Glory, set a new standard for writing merit.”

Named in honor of Catherine Marshall and her novel Christy, The Christy Awards are presented each year to recognize novels of excellence written from a Christian worldview.

Sigmund Brouwer is the best-selling author of 23 novels, with nearly 4 million books in print. Based on his inspiration for Thief of Glory, which Brouwer wrote to learn about and honor his parent’s stories, he leads The Chapters of Our Lives memoir seminars across the United States and Canada. He and his wife, Cindy Morgan, a GRAMMY® nominated and Dove Award-winning singer/songwriter, reside outside Nashville with their daughters Olivia and Savannah.