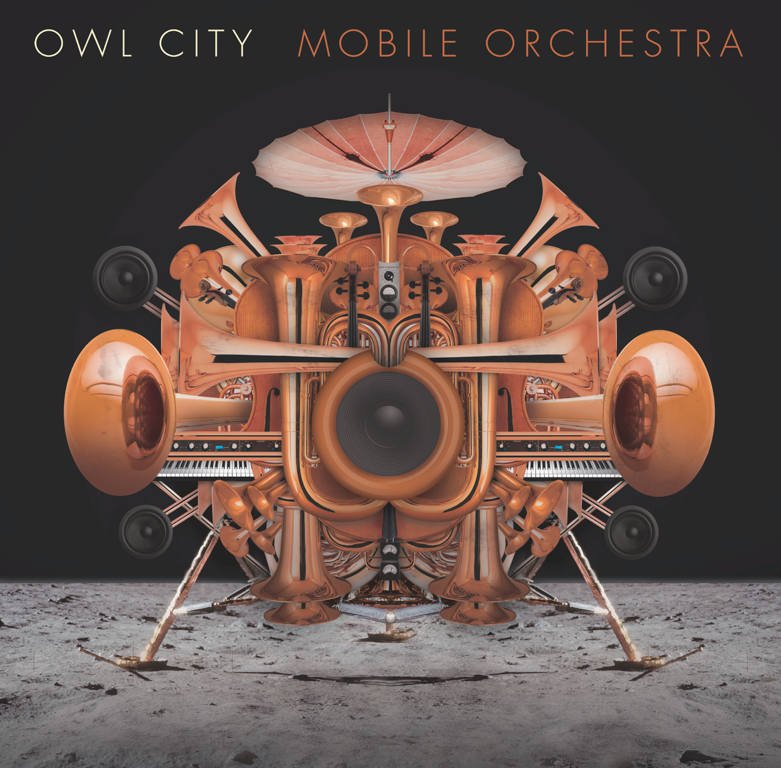 Owl City; the name emanates far and wide throughout both the secular and Christian worlds. This is of course mainly down to a certain “Fireflies” song off his 2009 Ocean Eyes album and, in lesser part, his “Good Times” party anthem with fellow pop sensation Carly Rae Jefferson off his 2012 Midsummer Station release. These two singles, especially the former, catapulted Owl City into the spotlight and elevated his status to “Pop Sensation” and, although that obviously has its benefits, that also comes with the added potential downfall of an artist having set the bar too high for themselves to maintain in the future. In all honesty though, “Fireflies” will almost definitely not be topped, and “Good Times” is probably out of reach too, and that can almost have a freeing element to the artist’s music making too. So, without further ado, does Mobile Orchestra match up to Young’s previous releases? Does it come close to reaching the bar set by “Fireflies”? Let’s take a closer look…

Mobile Orchestra is set into motion with the high energy and celebratory “Verge” which features the vocals of Aloe Blacc (you may recognise him from Avicii’s Wake Me Up). Originally crafted around the theme of a wedding in Young’s mind, “Verge” eventually took on the theme of graduating from college, as evidenced in the lead single’s music video. Blacc’s silky smooth vocals provide the perfect counterpart to Young’s punkish ones as the two come together over dance beats and well formulated synths throughout to build beautifully up to each chorus, where, upon the perfectly placed drop, the party atmosphere ensues. While there isn’t any complex lyrical depth to be found here, “Verge” gets Mobile Orchestra off to a fun and happiness inducing start, and not every song needs to be a deep one now, do they?

Light and airy synths mixed with the eerie bowing of a violin and a pad set the musical backdrop for “I Found Love.” A bittersweet look at young love, “I Found Love” provides the perfect respite after the energetic opener and will remind many long time listeners of Ocean Eyes’ core sound. Continuing the love theme, “Thunderstruck” picks the pace back up. Featuring the candy coated pop vocals of Sarah Russell, “Thunderstruck” takes listeners on the wobbly road of falling in love over a much livelier soundscape than the preceding track and is sure to get listeners’ feet moving once again.

The soundscape of “Unbelievable” will remind many of Midsummer Station’s “Good Time” as Young hops into a time machine and takes us back to the 90s. Featuring nostalgic lines like “When I was a kid I still had VHS Watched Fresh Prince and Jazzy Jeff,“ and “And if you vowed ‘no girls allowed’ Then you could join the club“ among many others wasn’t enough though as Young employs the help of 90s infamous pop star Hanson, who also helped co-write the track alongside Young & Matthew Thiessen (Relient K), to help take the 90s kids back to their childhoods. A fun song from start to finish, “Unbelievable” is one of the stronger songs on the record and will become a favourite for all those from the 90s, myself included.

Another seriously strong song follows in “Bird With A Broken Wing.” The intro to this song, and the whole song in general, will catch many listeners unawares as the song carries an edgy rock feel to it not heard previously on Mobile Orchestra. Driving guitar chords and purposefully struck drums combined with Young’s forceful delivery help hammer home the lyrics of this proactive and meaningful track. Christian fans of Owl City will interpret the wonderfully crafted lyrics as being the struggle out of the dark and hopelessness and into the light of God’s love but the lyrics are written in such a way they could be made to fit most stories. “It feels like I’m a lone survivor, Forgotten in a dark and deadly world, And on my own, I walk alone, To see the sun again, I’d give anything.”

Fans of country music will welcome Owl City trying his hand at country music next on the track “Back Home.” Featuring the unmistakable country tones of Jake Owen, “Back Home” merges Owl City’s natural sound with the foot stomping, hand clapping, storytelling sound of country music really well. Although country music isn’t usually my cup of tea, or home brew if you will, even I must admit this track is done well and is mildly enjoyable. Following possibly the strongest track on the record was always going to be a tough ask though and may ultimately prove to be its downfall with most listeners.

The all out electronic dance number “Can’t Live Without You” will get listeners’ feet-a-movin’ again as the music builds and fades at the pivotal moments to good effect throughout. Lyrics such as “you reached down out of nowhere and picked my heart up off the floor, you put my life back together, and I’m not broken anymore” and “you’re the only hope that I’m clinging too, and I hope you know I can’t live without You” would seemingly put this song on the Christian side of the coin but leaves it open enough for it to be interpreted as a love song for non-believers. Written in such a way to show both sides of the coin and to play to both sides, this upbeat track shows Young’s songwriting craft is on song, and, whichever way you interpret it, it’s a fun song nonetheless.

Candy covered pop synths make a reappearance on, and provide the main back beat for, Mobile Orchestra’s penultimate track “You’re Not Alone.” Another all out worship track, “You’re Not Alone” slows the tempo down a bit and features the soulful pop vocals of popular CCM artist Britt Nicole. Young adapts his vocals brilliantly to fit the tone of the track and, when mixed with Nicole’s vocals at the relevant stages throughout the song, a truly effervescent sound is created. That effervescent sound, combined with the pop orientated soundscape, helps to carry across the hope filled message that “You’re Not Alone” and God truly is all you need in this life, in what many would describe as a “bubblegum” track. A “bubblegum” track or not, Young and Nicole have created a track that’s easy to listen to and that will encourage and reassure many a listener, and they carry it off well.

Mobile Orchestra is drawn to a close by the seemingly ironically named “This Isn’t The End,” a track about a young girl losing her dad to suicide. The sad and melancholic song features brutally honest lyrics such as “Her dad was a good guy that everyone liked, but nobody knew he was dying inside, he promised his family he’d be alright, and then with a gunshot he left them behind” before offering respite through the hopeful lyrics “when the light goes out, this isn’t the end,” alluding to the promise of there being more for believers after this life on Earth comes to an end. Hauntingly beautiful, “This Isn’t The End” draws Mobile Orchestra to a gentle and peaceful close.

As a piece of art, Mobile Orchestra is a modern classic masterpiece. Filled with bright bold acrylic strokes, the odd undercurrent of dark and hopelessness lying beneath the surface in smudged black pastels, all rounded out with light and airy colorful streaks of watercolor, Owl City’s Mobile Orchestra canvas is awash with color and variety. It takes a true artist to master all of the individual styles found on Mobile Orchestra, let alone mix them all together to effortlessly form a unique and coherent vibrant piece of art.

As a collection of music, does Mobile Orchestra match up against Owl City’s previous albums though? It holds its own, so yes. Does it come close to the bar set by “Fireflies” and “Good Time”? Simply put, no, no it doesn’t, and it’s unlikely that any of the songs off it will reach those heights either (although I am massively surprised “Verge” hasn’t been more successful than it has been to date!). If a future song of Owl City’s eclipses either “Good Time” or “Fireflies,” I will be the first to hold my hands up and admit I was wrong but, although Young has the talent to recreate such success in abundance, I just doubt they will ever be eclipsed.

Measuring up to bars set in the past shouldn’t matter one bit though and Mobile Orchestra is a genius easy-to-listen-to work of art filled with substance, energy, passion, quality, and layer upon layer of creativity. With a little something for everyone, Mobile Orchestra has once again proved that Young is a master at his craft, is at the top of his game, and, to borrow a lyric from “Unbelievable,” Young is just “2 legit 2 quit.”