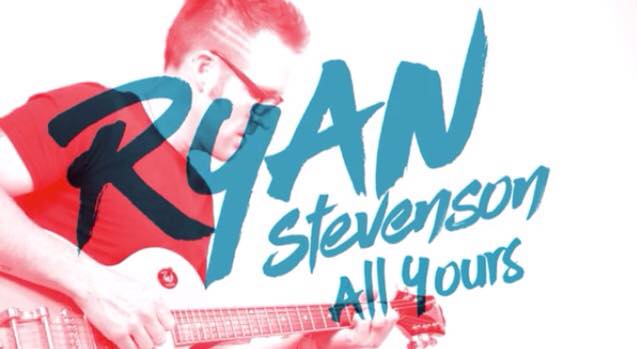 “All Yours,” the latest single from GRAMMY® Award-nominated Gotee artist Ryan Stevenson, is available at all online outlets now, including Apple Music, Spotify and Amazon Music. The “All Yours” lyric video premiered recently and can be seen above.

The in-demand single follows Stevenson’s hit “Not Forgotten,” which held the #1 position on Billboard’s Hot AC/CHR chart for two consecutive weeks earlier this year, and featured GRAMMY®-winning, multi-platinum artist TobyMac. Both “Not Forgotten” and “All Yours” will be spotlighted on Stevenson’s highly anticipated Gotee full-length debut, Fresh Start, releasing September 18.

Written by Stevenson and Bryan Fowler, and produced by Fowler, “All Yours” has been New & Active for two consecutive weeks at Christian Hot AC/CHR radio. The single is already receiving airplay on Air1, WLCQ, WYPH, KMOQ, KZTH, WYQQ, WHRZ, WJLZ and WBVM, among other outlets.

“’All Yours’ is a simple, honest prayer from a very grateful heart,” said Stevenson. “Over the last several months, the Lord has been revealing amazing Truths to me about His grace and mercy. My eyes have been opened to the fact that He loves me just as I am, not as I think I should be. In spite of my failures and defeats, He still accepts me and has chosen to step into the storms of my life; walking through the messes with me; revealing His True character, nature and Father’s heart. Understanding His unwavering goodness has literally swept me off my feet and has made me want to joyfully tell Him ‘I am all Yours.’”

Stevenson will be performing “All Yours,” along with other selections from Fresh Start, as he joins the Newsboys’ “We Believe … God’s Not Dead” Tour for more than 40 dates this fall. Earlier this year, Stevenson appeared on TobyMac’s spring tour, which also featured Mandisa and Capital Kings.

Nominated for a 2014 GRAMMY® Award as co-writer of TobyMac’s hit single, “Speak Life,” Stevenson’s own acoustic version of the song is featured on his Holding Nothing Back EP. The project, which also includes the hit title-cut, released in 2013.

After capturing TobyMac’s attention, Stevenson—who spent seven years as a paramedic—was signed to an exclusive recording agreement with the iconic artist’s Gotee Records. The Pacific Northwest native is a husband and father of two boys.


Buy All Yours:
iTunes | Amazon