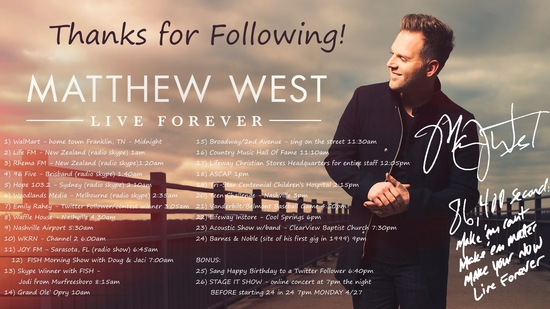 Most artists go on tour and do interviews when promoting their new albums. But when it comes to Matthew West, he does that and more — a lot more. Kicking off the release of his brand new album, Live Forever, which just released this week and is already touted as a “masterpiece” and “must have album,” West staged an epic promotion – a first for the Christian music industry.

Beginning at midnight April 28 and running through 11:59pm, Matthew West went on a non-stop “24 Shows in 24 Hours” event around his hometown of Nashville. Basing this unique album promotion from the album’s theme of time, “I wanted to do something that illustrated the theme of this record,” West shares. “86,400 seconds are in every 24 hours. Every second is a gift, and time is precious. So how can we make the most of the time we have? How can we make a memory and leave a legacy?”


West spent his 86,400 seconds of April 28 performing for the children and their families at Tri-Star Children’s Hospital, doing the weather and serenading the morning show of a local news station, visiting and performing at The FISH Radio, Teen Challenge, ASCAP, Waffle House, Grand Ole Opry, Country Music Hall of Fame, Lifeway, a full-band acoustic concert at ClearView Baptist Church and he called into various Austrailian and New Zealand radio stations to do interviews and perform, where he also found out his single, “Day One,” went No. 1. Additionally, he sang the national anthem at the Belmont vs. Vanderbilt baseball game and added a bonus and sang happy birthday to a fan who tweeted him first in a contest. West capped off the day with a performance at Barnes & Noble, which was the site of his first ever artist performance in 1999.

The #24in24 kicked off at Wal-Mart where West met a few fans and bought them the album, which can be seen here from K-LOVE’s exclusive video footage. The day wrapped by getting back on his tour bus to continue on his Live Forever spring tour, hitting numerous cities across the U.S. Be sure to check out the list of his 24 stops, placed below.

The entire event was captured by K-LOVE TV whose crew followed West around the entire day, capturing each moment to air as a series exclusively for the network. Details of the airing of the series will be announced shortly.