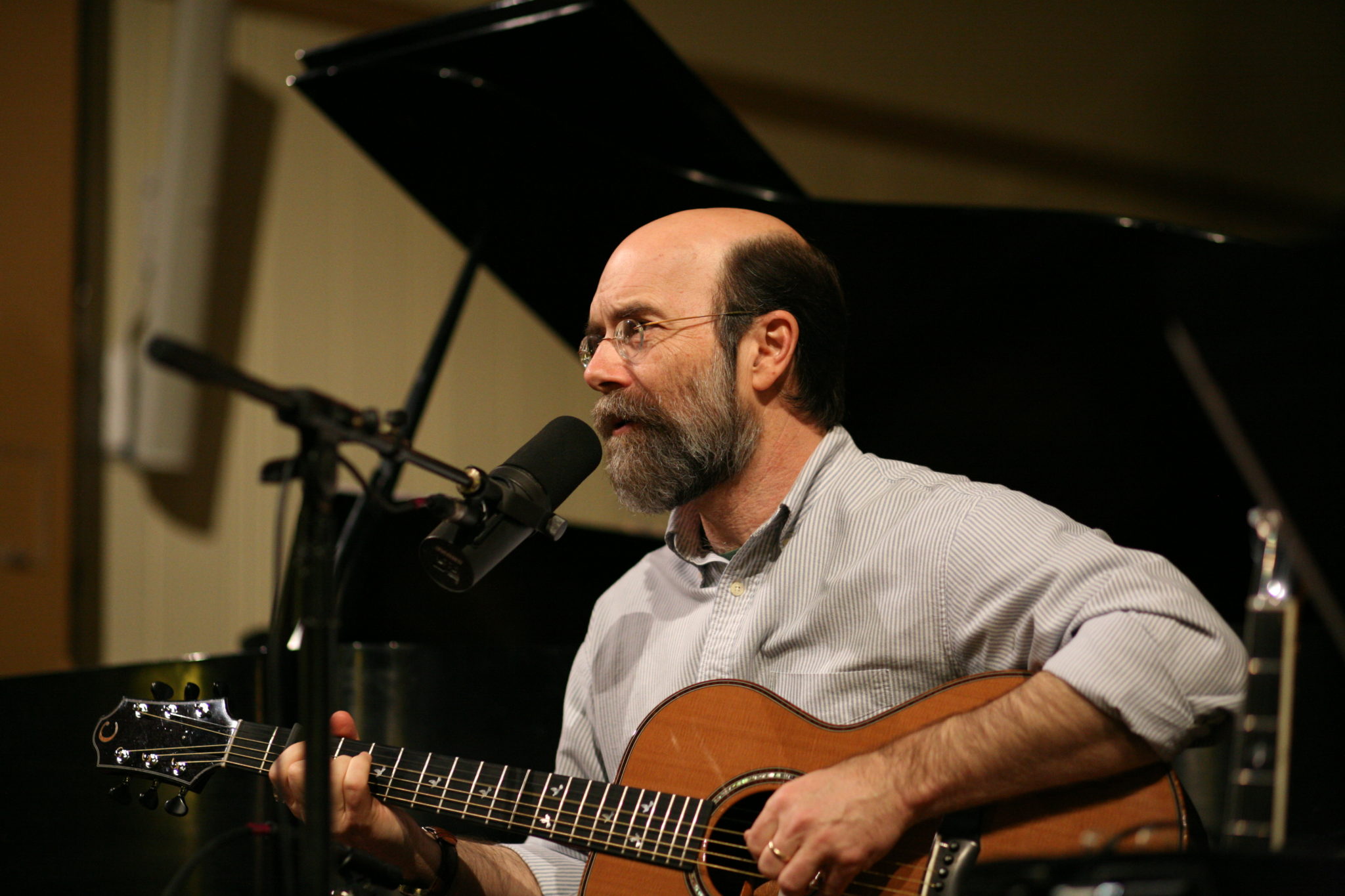 In Concert: Michael Card – God’s Minstrel With A Message

Contemporary Christian Music has come a long way since its fledgling days in the late 1960s, having had its fair share of milestones along the way. The 1980’s are particularly noteworthy, a period when CCM reached a far wider Christian audience than ever before, and artists like Amy Grant and Michael W. Smith could even be heard on some of the mainstream radio stations.

But it is impossible to muse over the 1980’s Christian music scene without tipping the hat to one of its stalwart singer-songwriters, Michael Card. I had the privilege of seeing him live in concert at the Abbey Road Baptist Church, London, in March last year.

The church is just a stone’s throw away from the famous Abbey Road Studios, where the Beatles recorded their bestselling Abbey Road album in 1969. Situated directly outside the studios is the famous zebra crossing on which the “fab four” were photographed walking across, which provided the iconic image for the album’s cover. Today, the crossing is a pilgrimage-shrine for countless of Beatles’ fans who congregate there from all over the world, waiting in turn to reproduce that same image and glory as a backdrop to their own lives.

Inside the church, his stage and equipment are all set out – with a guitar, a piano and a banjo taking pride of place. But anyone who has never heard of Michael Card could scarcely pick him out as he mingles inconspicuously among the small gathering prior to the gig. Only when a snippet of praise directed at him is overheard, such as, “Your music helped me greatly through my early years as a Christian”, is his cover blown. By the way, that particular praise came from the host pastor as he recalled his 1980’s Christian experience listening to Michael’s music.

He emerges from his temporary obscurity among the people, sits at the piano, and opens with a flurry of soul-ministering songs: Could It Be, God’s Own Fool, Crucified Arose, Soul Anchor and the beautifully soothing Come Lift Up Your Sorrows.

This is what one comes to expect from Michael Card. Although a scholar, a prolific writer, and a seminary-grade Bible teacher, he opens with songs that minister straight to the heart, not the head… and not to the inflated ego, unless to humble it. Among his opening quintet you will find such lines as “Could it be that the only answer is You [Jesus]”, “Come lose your life for a carpenter’s son; believe the unbelievable and come be a fool as well”, and “Lift up your sorrows and offer your pain; Come make a sacrifice of all your shame”.

He pauses to engage the audience and muses that although it is difficult to pick his favourite song from among the 400+ he has written, Come Life Up Your Sorrows would probably be it. He says he wrote it with Vance Taylor (Earth Wind and Fire), with the backdrop of Psalm 51 in mind, especially King David’s loss of his infant son. Michael experienced the loss of a nephew to cancer and also two nieces in their infancy, which had a deep impact on his entire family.

These songs deal with the heartache, disappointments and human weaknesses in real life. But also with their solution, which is the cross of Christ coupled with a daily and hourly coming to him as the One who was wounded for us. It is there that we can exchange our burdens for His strength and hope. “The Cross equals suffering; that’s the deal”, he reminds us.

He lightens the mood by quipping that he has “become an expert in doing the opposite of what the music industry says you are supposed to do”. Here, one detects a refreshingly non-contemporary attitude, not unlike that of a Van Morrison or a Rory Gallagher who cherished their musical freedom too much to worry about the pressures, strictures and expectations of the industry. Michael’s music is raw, served straight from the heart, and kept real.

An expert on the Gospels and on Hebraic themes, he skilfully marries Jewish themes with New Testament doctrine. He has written several books on the themes of the Gospels, and has released accompanying CDs with songs birthed out of his studies. This body of work comes under the umbrella title of the “Biblical Imagination Series”, a project that endeavours to connect the heart with the mind through the words of the Bible.

He picks up his guitar and begins to play some of these more recent “Gospel songs”. By the way, he plays a right-handed guitar left-handed. This means the strings are upside down (bass at the bottom) requiring knowledge of a host of esoteric chord shapes to play. At the end of the concert I asked him how he learned all of those alternative chord shapes. “A group of us musicians growing up in Tennessee shared everything with each other”, he remarked, and casually added, “Did you know that Jimmy Hendrix played his guitar upside down?” He also reminisced “My first guitar was a pre-War Martin D45 which I loved”.

As the unlikely and tenuous common thread between Michael Card and Jimmy Hendrix struck my astonished brain, I couldn’t help but contemplate two facts. First, his style of music – with its American folk-Gospel influences and roots in the Jesus movement era – might seem a little dated to a much younger Christian audience today (that excludes yours truly!). Notwithstanding, it still has great appeal to a broad base of believers because it ministers to the heart and to real life situations.

Second, the only “scandal” that some Evangelicals have attempted to pin on Michael Card is that he has performed joint concerts with John Michael Talbot, a Roman Catholic singer-songwriter. But any way you look at it, that’s not exactly like thrashing your hotel bedroom and throwing the TV set out of the window in an alcohol-induced frenzy, is it? Which he never did by the way! Not sure Hendrix did either for that matter!

To say Michael Card’s music is dated would be like saying jazz is dated, or the songs of Bob Dylan or the hymns of Charles Wesley are dated. On the contrary, they have an evergreen quality. And Michael Card is God’s minstrel with a perennial message, writing and singing his hymns both ancient and modern.

He sings a simple song called Freedom taken from the album, Luke: A World Turned Up Side Down (just like his guitar!). The idea is explained in his book A Better Freedom, Finding Life As Slaves of Christ.

Next he launches into a string of his classic songs with their Hebraic themes, opening with the beautiful God Will Provide A Lamb, followed by the uplifting Jubilee, and many Christians’ favourite devotional song of the 1980’s, El Shaddai, made especially famous back then by Amy Grant. Here, Michael’s daughter Maggie accompanies him on beautiful vocals as he returns to his piano.

The ministerial torch is now being passed to the next generation of the Card clan, and it’s just one of many. Michael’s grandfather was a preacher from the “Carolina Hills” and you can hear a recording of his preaching voice book-ending Michael’s tribute song to him, For F.F.B., on the album Poiema. There, his granddad delivers what must be one of the great quotes of Christendom, “I have no hope except that I believe that Christ died for my sins, according to the Scriptures. I expect to swing out into eternity on that.” It makes the hairs on one’s neck stand to attention!

El Shaddai has a now familiar, even hackneyed, minor-chord-progression-feel that tugs on the heart strings. But that renders the song no less authentic or anointed because of it.

Michael tells us that as far as the best scholars know, Israel never celebrated the year of Jubilee when all slaves go free. However, when Jesus announced “the acceptable year of the Lord” had arrived, he was referring to the year of Jubilee. “Jesus is our freedom”, he says, which ties it all back to one of the evening’s main themes: true freedom is found only by becoming a bond-slave, or doulos, of Christ.

He continues the notion of freedom with Things We Leave Behind, containing the line, “It’s hard to imagine the freedom we find from the things we leave behind”. The song uses the example of Simon Peter abandoning his nets to follow Jesus, only to discover that he has also left behind his pride and everything else that held him back from achieving God’s dream for his life.

Maggie and Michael continue to accompany each other on Why – “Why did it have to be a friend who chose to betray the Lord” – which laments the pain and need for man’s redemption, and extols the price paid by Christ’s precious sacrifice.

At this point Michael stops to tie his shoelace, “I can almost hear my grandmother say ‘You’ll trip over that’”, he explains, even though he is still seated.

He returns to compositions of more recent years taken from his studies in the Gospel of Matthew (2013), starting with This Is Who You Are. He discovered that Matthew’s Gospel is all about identity. We can only find our true identity by understanding Jesus’ identity. “To find out your identity, just look at His. This is what Matthew does”, he reveals. He continues with And Dreamed, and His Humanity, taken from the same album.

As he begins to draw the program of 22 songs to a close, he sings a few taken from the albums that were the fruit of his studies in both Mark’s and John’s Gospels. In Memory Of Her Love (from the album Mark, The Beginning of The Gospel) relates the story of the woman who anointed Jesus with costly spikenard, and of whom Jesus promised, “Wherever this Gospel will be preached what this woman has done will be remembered”.

Michael reckons that the alabaster jar of spikenard would have cost $30k – a year’s wages – while Jesus was later betrayed for just 30 pieces of silver, around $6k. The message is that Jesus invites his followers and worshipers “to make our story part of his story”, by a devotion to him that recognizes His true value. It is from this that we come to understand our own true worth, significance, and identity in him.

He closes with a resounding rendition of Immanuel and a final Benediction, and encourages us all to “Love one another, serve and forgive. Stay close to God.”

He seems to have had one disappointment with his whole performance – he suddenly sees his lonely banjo, holds his head in his hands, and exclaims apologetically, “Oh, I forgot to play that. Sorry”. My only disappointment with the whole evening was that scarcely 35 souls showed up.

On exiting the church building, it is possible to see to the left that famous zebra crossing where 35 or more souls often queue during the day to take their Beatlesque selfies. It now seems strangely empty, silent, and faded beneath the dim street lights of a late and foggy London evening. The graffiti on the perimeter wall of Abbey Road Studios now appears cold to the eye. I turn my head away and head for home, with the sounds of heaven in my ears, the true image of Christ the God-Man in my mind, and the warmth of the Spirit and His Word in my heart.