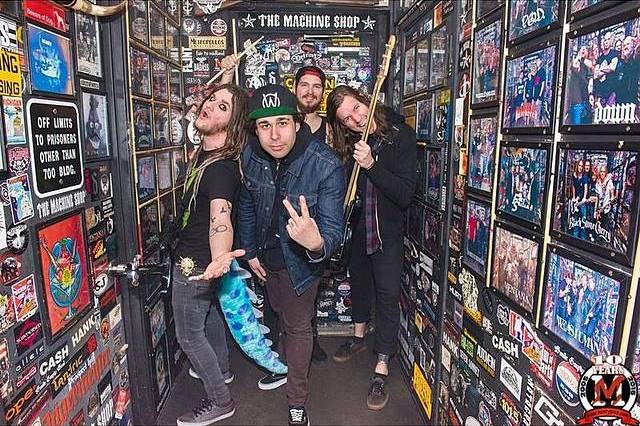 Islander Blazes Through Newport on Of Beauty and Rage Tour

On Saturday, March 21, 2015, the of Beauty and Rage Tour rolled through Newport, Kentucky. There were four bands that played the Thompson House on this particular night: Seven Circle Sunrise, 3 Years Hollow, Islander, and of course, the headlining RED. The set with the greatest amount of sheer intensity, however, was not the heralded headliners, but rather the direct supporting act, the hard rock upstarts Islander.

After the house lights had gone down, the quartet made its way onto the stage one by one, and by the time vocalist Mikey Carvajal stepped on, the Greenville natives were kicking into the hard-hitting opener from their debut full-length effort, 2014’s Violence and Destruction. “Counteract” got the crowd going like any veteran rock band would, except that they weren’t a veteran rock band. On the record, it flows right into “The Sadness of Graves,” so naturally one would think that would translate live fairly well. However, there seemed to be some sort of “technical difficulty” going on with the guitar. Instead of trying to front it and “play it cool” like many other bands would, guitarist JR Bareis decided to let someone else take on his duties for part of the next song, which was “The Sadness of Graves” after all. The result was VIP guest (and one-time honorary band member) Aaron Greenwood bringing the riffs during the first half or so of the song, before JR took his instrument back and finished the job.

The remainder of the band’s setlist was taken mostly from Violence and Destruction, and included their latest single “New Wave.” The quartet did, however, play two songs from their 2013 EP Pains., namely “Big Shot” and “Lucky Rabbit.” Carvajal was extremely energetic throughout the entire set, to the point of crowd-surfing mid-song, on two separate occasions. One of the most memorable moments came when a girl in the crowd yelled at everyone who was just standing still, a lament which Carvajal heard and echoed from the stage. By the set-closing “Coconut Dracula,” the entire audience had finally gotten into it and was left wanting more.

Overall, the excitement from Islander was contagious, and their music had an ebb and flow to it that felt natural. It’s quite rare that the most-talked-about act after a show is one other than the headliner, but Islander may have accomplished that very feat in the tourist town across the river from Cincinnati.