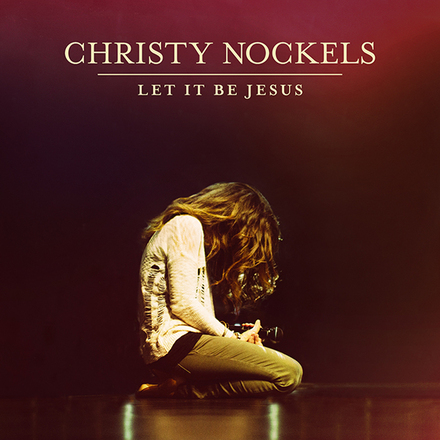 Whether in arenas for Passion Conferences or in the auditorium of Passion City Church, Christy Nockels is known for leading thousands in heartfelt worship, and April 28 will mark the release of her first ever live worship album, Let It Be Jesus. Recorded live at Passion City Church in Atlanta, the album captured a night full of praise to God.

“I can’t wait to release this offering and to share what a beautiful night this recording was,” Nockels said. “Something so unforgettable happened as we worshipped Jesus together in wonder and remembrance.”

The live album will feature several brand new worship songs along with a new recording of “Let It Be Jesus,” which was previously included on Passion: Take It All.

As a featured leader at the Passion Conferences, Nockels recently led thousands of young adults in worship at Passion 2015 alongside Chris Tomlin, Crowder, Kristian Stanfill, Matt Redman and more. Her performance of “My Anchor” is featured on Passion: Even So Come, an album recorded live at Passion 2015, which released yesterday.


About Christy Nockels:
Christy Nockels is a worship leader/singer-songwriter who lives in Atlanta, GA with her producer husband Nathan Nockels (Passion, Matt Redman, Laura Story), and their three children. Christy and Nathan toured nationwide for several years as the duo Watermark, recording four acclaimed albums together. In 2009, Christy released her first ever solo album, Life Light Up followed by a 2012 sophomore release Into The Glorious. Christy has played an integral role in the Passion Conferences since its 1997 inception, and she recently led thousands in worship at Passion 2015 in Atlanta and Houston. Along with her husband, she leads worship at Passion City Church in Atlanta, where she recorded her upcoming live worship album Let It Be Jesus.