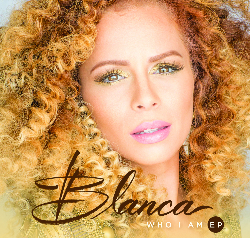 With the highest charting debut single from a new artist this year,”Who I Am,” and performances in front of over a half million people on Winter Jam, critically-acclaimed powerhouse vocalist, Blanca, is garnering great anticipation for her full-length debut solo album. The self-titled project releases May 4 and builds upon the soul/pop, hip-hop vibe of her debut EP, Who I Am.

Currently on tour with Winter Jam, the largest tour in North America for the first quarter, according to Pollstar, Blanca has been winning over fans and critics alike.

Of her solo work, NewReleaseTuesday.com states: “The music featured here is the work of someone with a fearless heart for Jesus and a bold passion for the music she makes. It’s clear she’s found her place as a solo artist.”

Deeply involved in the creative and songwriting process of the record, the new album and transition to solo artistry is a significant personal and professional achievement for Blanca. “I’ve lived a lot of my life in fear and for a while was afraid I could never be anything outside of Group 1 Crew,” she shares. “Creating this project stretched me and challenged me to be authentic and real.”