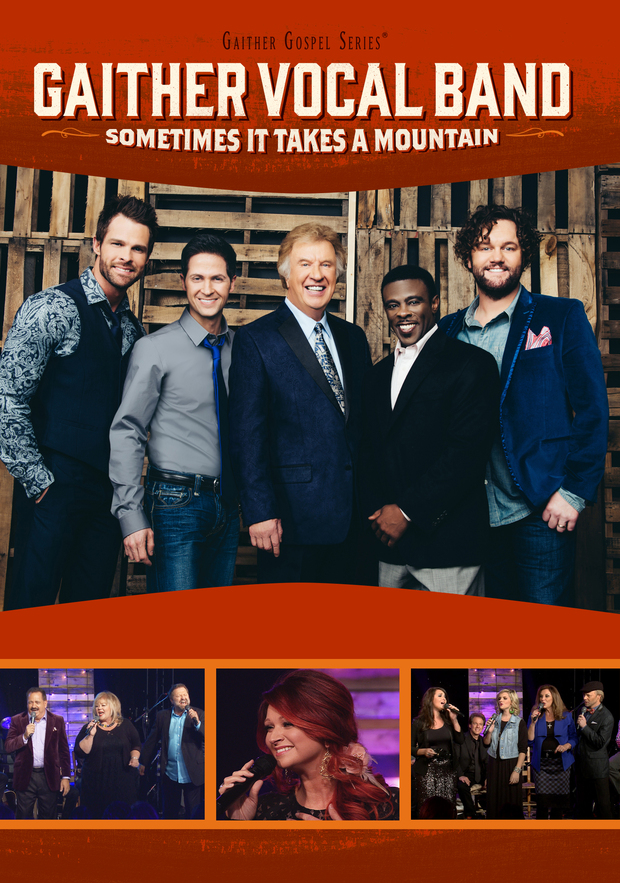 The videos feature LIVE performances of the songs from the Sometimes It Takes a Mountain audio recording along with additional numbers as well as special performances by HOMECOMING artists The Martins, The Isaacs, Goodman Revival, Charlotte Ritchie, Buddy Greene and The Nelons.

The recordings include interview footage with group members Bill Gaither, David Phelps, Wes Hampton, Todd Suttles and Adam Crabb and highlight the unmistakable harmonies that have garnered five GRAMMY® nominations, two GRAMMY® Awards and 17 GMA DOVE Awards.  The Gaither Vocal Band was nominated for a 2015 GRAMMY® Award and was inducted into the Gospel Music Hall of Fame in 2014.

The group’s intricate harmonies are showcased on songs written by some of gospel music’s most respected songwriters including Bill and Gloria Gaither, Suzanne Jennings, Mosie Lister, Michael W. Smith, Gerald Crabb, Thomas A. Dorsey, Henry Slaughter, Jeff Silvey, Reba Rambo-McGuire and Dony McGuire, among others.  Crabb’s award-winning vocals are highlighted on the recording’s first radio single, “Sometimes It Takes a Mountain,” which is currently in the Top 5 on the national radio chart.

The new DVD releases will be featured on an international TV campaign which will air on PBS, Dish TV, DirecTV, AT&T Uverse, GaitherTV, TBN, RFD, FamilyNet, CTN, GMTN, Guardian, Liberty, TCT and TLN.  It will air in Canada on Vision TV, CTS, The Miracle Channel and Hope TV.

The Gaither brand of artists and products topped the BILLBOARD Year-End Chart of Music Video Sales Labels for 2000, 2011 and 2014.

The Sometimes It Takes a Mountain and Happy Rhythm DVDs are exclusively distributed by Capitol Christian Distribution and will be available throughout general market stores and the Christian marketplace in addition to online retailers including iTunes, Amazon and www.gaither.com, where it is available now.

The Gaither Vocal Band will be on tour from now through the end of the year and will be a highlight of the Gaither Homecoming Christmas Tour.  A list of tour dates can be found at www.gaither.com.

For further information regarding the Gaither Vocal Band and/or Sometimes It Takes a Mountain and Happy Rhythm, including a video preview with a sampling of music, visit www.gaither.com.

To hear some of the music from the new releases, visit: http://www.youtube.com/watch?v=o6D5tuQNLQk