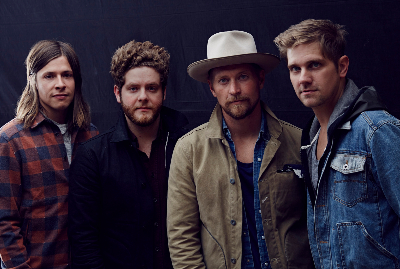 Atlantic/Word Entertainment  recording group NEEDTOBREATHE has offered a private concert as part of their NEEDTOBREATHE Classic auction for charity. The silent auction, which coincides with the Grammy nominated rock band’s annual NEEDTOBREATHE Classic celebrity golf tournament, will begin at 6pm ET on March 23rd, and also features items donated by musical artists including Gavin DeGraw, Goo Goo Dolls, Katy Perry, and Kings Of Leon among others.  Proceeds from both the golf tournament and auction benefit the Palmetto Medical Initiative (PMI), a Charleston, South Carolina-based non-profit organization which seeks to bring quality health care to developing countries around the world.  In addition to tournament participants and spectators, the NEEDTOBREATHE Classic auction is open to fans around the world who can bid on items through the web and their smart phones using Qtego auction technology.  To register for the auction, view auction items, and more, please visit https://qtego.net/qlink/needtobreathe.

The NEEDTOBREATHE Classic, now in its third year, brings together PGA golfers, celebrity athletes from the NFL and MLB, and Grammy-award winning musicians for a day of golf and an evening of music all for charity at Charleston, South Carolina’s Daniel Island Club.  The 2014 tournament raised $140,000, which funded over half the cost of a second medical clinic that PMI is building in Uganda.  Last year, PMI launched its “20 by 20” campaign, a plan to have 20 medical centers built by 2020 in Uganda and Nicaragua with the goal of blanketing a particular area and elevating care for an entire region.  The 2015 NEEDTOBREATHE Classic will specifically benefit PMI’s “20 by 20” campaign.  For more information about the NEEDTOBREATHE Classic, please visitwww.commonwealthcares.org.

In other news, NEEDTOBREATHE is set to release their first-ever live album, NEEDTOBREATHE: LIVE FROM THE WOODS, April 14th. Recorded last September at Nashville’s The Woods Amphitheater at Fontanel, NEEDTOBREATHE: LIVE FROM THE WOODS captures the GRAMMY® Award-nominated and 10-time Dove Award-winning rock band on stage and at their best, performing a full live set including such hits as “Washed By The Water,” “Something Beautiful,” “Keep Your Eyes Open” and “Multiplied” (see tracklisting below).

NEEDTOBREATHE’s acclaimed new single, “Brother (Feat. Gavin DeGraw),” is set to impact Hot AC radio outlets nationwide in early April and this week broke the top ten at Christian HOT AC/CHR, landing at #9, while also gaining three spots at National Christian Audience chart where it landed at #21. The song had a strong week gaining support from major AC Monitored markets like Dallas and Washington DC. In addition, the track’s companion video recently made its broadcast debut on VH1’s Top 20 Countdown and can be viewed HERE.  “Brother (Feat. Gavin DeGraw)” was applauded by Entertainment Weekly as “full, anthemic, a little bit woodsy and alarmingly catchy,” adding “(frontman) Bear Rinehart’s sincerity is unmistakable in his vocals, and the bluegrass backing culminates in something sweetly rich.” “Brother (Feat. Gavin DeGraw)” is available now on the iTunes Store and all DSPs, while the original version of the songcan be found on NEEDTOBREATHE’s chart-topping RIVERS IN THE WASTELAND.

NEEDTOBREATHE will embark on their first North American headlining tour of 2015, kicking off April 23rd at Tuscaloosa, Alabama’s Tuscaloosa Amphitheater and then traveling through the summer (see itinerary below). Dubbed “Tour De Compadres,” the aptly named trek sees NEEDTOBREATHE bringing out some of their best friends as support, with special guests including Ben Rector, Switchfoot, Drew Holcomb & The Neighbors, and Colony House. For complete details and ticket information, please visit www.needtobreathe.com.

2014 marked the most extraordinary year of NEEDTOBREATHE’s already celebrated career, which also includes three Dove Awards for Group of the Year. RIVERS IN THE WASTELAND, the South Carolina-based band’s fifth studio album, debuted at No. 1 on Billboard’s “Christian Albums” chart upon its April release, while also topping Billboard’s “Top Rock Albums” and “Top Alternative Albums” charts and entering the overall SoundScan/Billboard 200 at #3. What’s more, the album’s stunning “Multiplied” earned NEEDTOBREATHE their first ever GRAMMY® Award nomination.