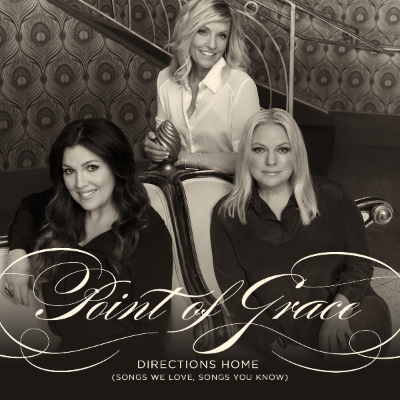 Point of Grace, comprised of Denise Jones, Shelley Breen and Leigh Cappillino, co-produced the record with GRAMMY®  Award winner Andy Leftwich, also a member of Kentucky Thunder. The project, which features special guests 14-time GRAMMY® winner, Ricky Skaggs and 20-time GRAMMY® winner VInce Gill, includes songs originally recorded by the likes of Trace Adkins, Wynonna and Carrie Underwood, among others. Songs like, “Something in the Water,” “You’re Gonna Miss This” and “Only Love” (see full track-listing below) reflect the country style shift the group made five years ago with the release of No Changin’ Us, which took home Country Christian Album of the Year at the 2011 Dove Awards.

“Directions Home really goes back to our country roots,” shares Leigh. “We wanted to make the music we love in a style we were very confident we could deliver.”

They will be delivering that style this Friday, March 6, with an appearance at the Grand Ole Opry, which will include their duet with Ricky Skaggs, who, as Denise shares, “took that song [‘Two Roads’] over the top.”

“Performing at the Grand Ole Opry is an absolute dream and honor for myself and the Point of Grace girls.The Opry has defined Country music for these many decades by faithfully revering the artists of the past while giving a platform to the rising Stars of tomorrow,” says Leigh. “We are thrilled to be part of the show, sharing music from our upcoming album, Directions Home, in a place that truly feels like home to us.”

March 27th marks the launch of the Spring leg of the You Amaze Us tour, which Point of Grace will be co-headlining with Curb recording artist, Selah. Full tour schedule and ticket information is available here.