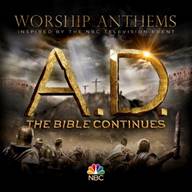 From executive producers Roma Downey and Mark Burnett, creators of The Bible mini-series, which garnered over 100 million viewers, and the feature film Son Of God, comes the epic TV event, A.D. The Bible Continues, which will premiere on NBC starting Easter Sunday, April 5, 2015. “A.D” picks up where “The Bible” left off, continuing the greatest story ever told and exploring the exciting and inspiring events that followed the Crucifixion of Christ. In conjunction with this spectacular new dramatic television series, Integrity Music, in association with WILDFIRE7, is releasing Worship Anthems Inspired By A.D. The Bible Continues on March 3.

This new album brings together some of the most well-known songs sung in churches around the world with such renowned Christian artists and worship leaders as All Sons & Daughters, Lincoln Brewster, Paul Baloche, Jeremy Camp, Darlene Zschech, Desperation Band, Natalie Grant, Kim Walker-Smith, Kari Jobe, Rend Collective, Newsboys and more. Each of the songs on Worship Anthems Inspired By A.D. The Bible Continues was specifically chosen to complement the themes of the twelve A.D. television episodes.

“After watching The Bible and seeing the impact that this telling of the Biblical story had, I was anxious to see what Mark and Roma’s next project would look like,” said C. Ryan Dunham, President of Integrity Music. “So I was pleased to learn that they were working on another series, this time telling the story of the early church… our hope is that Worship Anthems deepens the viewing experience of A.D. The Bible Continues and gives people a ‘take away’ musical resource that keeps the wonder alive while pointing listeners to Jesus.”

“Music is such a wonderful way to continue telling the stories of ‘A.D.’,” says executive producers Roma Downey and Mark Burnett, “and we are excited that Integrity Music is able to bring together such incredible artists to make this happen.”

Leading up to the launch of A.D. The Bible Continues, Burnett and Downey will host special screenings in cities around the U.S., sharing scenes from the TV event. This includes a screening with worship guests All Sons & Daughters on March 5 in Colorado Springs, CO, headquarters of Integrity and its parent ministry David C Cook. A previous screening with Integrity’s Latin-American worship leader Christine D’Clario was held in Miami on Feb. 6.

1) We Believe – Newsboys (See “A.D.” video trailer featuring this song at this link.)

2) Buried In The Grave – All Sons & Daughters

11) There Is Power – Lincoln Brewster