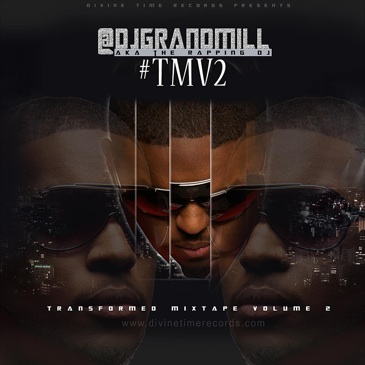 Turntablist extraordinaire DJ Grand Mill takes center stage on his mixtape #TMV2. The Tennessee native is a DJ, Producer and yes, a Turntablist. Ask any Turntablist what the difference between themselves and a DJ is, and you will surely be, rather emphatically, educated. A Turntablist is one who manipulates the records, stylus and mixer to affect the output vs. one who simply plays records.

According to Mill, his calling was introduced in a prophetic dream from his father, Bishop Terry Minor Sr., and he has been involved in music with a purpose ever since. Mill has shared the stage with notable artists such as Canton Jones, Erica Cumbo, Mr. Del, K-Drama, Pettidee and Manafest, receiving worldwide radio airplay along the way.

#TMV2 is a free to download mixtape, and although a no brainer based on that alone for hip hop fans, is certainly worthy of your attention otherwise. It is typically fairly easy to identify on an album how much hands on time the artist has. What usually stands out is the level of cohesiveness between the Production side of the track(s) and the lyrics laid over the top. #TMV2 is a perfect example of an artist that is all over every aspect of his music. Each and every track represents a harmonious marriage between beats and lyrics.

The opening (and title) track will immediately introduce you to the regional influence of DJ Grand Mill if you were previously unaware. Southern flavor through and through, “#TMV2” plays largely as an introduction to the rest of the album and the expected theme and tone to be found within.

“Fresh Wit It” is a club friendly track featuring Mr. Del. Familiar horns in the background should entice even the most timid of dancers to at least sway side to side while everyone else goes crazy. The theme of the track is a celebration of sorts of being filled with the Spirit. Mr. Del has a welcome and unique delivery, and his bars on Fresh Wit It will surely send those unfamiliar with his work seeking his library out.

“The King” is primarily an instrumental but does provoke the idea of whether or not one’s faith is transparent in how they go through life. It also addresses whether or not we take the time to identify what’s on the inside of those around us vs. passing judgment based on our first and often stereotypical impression.

“I’m On” is aggressive, both in its beat and its lyrics. Mill takes the opportunity with the track to reinforce the intentional purpose we are all called to serve God with in our lives. Be warned, the beat and the lyrical reinforcement may get you out of your seat and changing your day’s or week’s plans, as you seek ways to spread the word.

“Nobody Like You,” plays almost as a part two to “I’m On,” although it does so with a much more scaled back delivery, notably with a melodic background featuring Terjuana Minor. Nobody Like You also picks up I’m On’s theme of serving life with a purpose and addressing specifically where we look to for consolation and reinforcement.

“Aint Scared” returns to the in your face lyrical onslaught found in “I’m On.” Teaming up with Kre8tor, the grimy beat and line in the sand lyrics address the idea that Christians are weak and timid. The idea that some seeking fame and fortune may compromise their faith or their walk in the pursuit of worldly gifts is also broached.

Grand Mill takes the opportunity on “Free” to inform all the naysayers aka “haters” that he is not bothered by the stones they may seek to cast, or ridicule thrown. Galatians 5:1 and 2 Corinthians 3:17 are both referenced within the track and serves as the clear influence behind Free. DJ Grand Mill unsurprisingly perfectly melds the lyrics to a beat that will leave you feeling encouraged and motivated, if not seeking your bible to view the aforementioned verses.

“Our True Value” is an intermission of sorts, at least for Mill’s lyrics, as it is a portion of a sermon from his father, Bishop Terry Minor Sr. the substance of the interlude fits right in with the over arching idea of seeking and obeying God’s calling for our lives. While the track may not be your first choice to bump in the ride, there is something about Bishop Minor’s delivery that will lead you to at least feel compelled to sit down for one ten minute session and listen to what God has to say through him.

Questioning the readiness of us all for Christ’s return, Mill addresses what can be an uncomfortable thought for many on “Are You Ready.”

“Trumpet Blow” returns to the club friendly horn and beat theme found on “Fresh Wit it.” DJ Grand Mill again addresses the questions from Are You Ready, this time while compelling introspection on the dance floor.

“Tell Me” is a bit of a direct challenge to others in that he questions where their motivation is coming from in how they live their lives; almost feeling like a dig at performers throughout that “real men aint afraid to rep God, real women aint afraid to please God.”

Mill takes the opportunity with “His Image“, to continue the prevailing theme found throughout that there should be a purpose and motivation to how one decides to journey through life. Challenges of every day temptations can be overwhelming should one not intentionally seek to be like Christ.

“All I Need” is another bass thumper that seeks to simplify what is necessary for joy in life. Mill seeks to impress that the stronger your faith in God’s vision is, the less there will be a need to seek worldly pursuits.

“Amazing God” is Mill’s homage to the Most High set to the familiar dance production found in so many tracks throughout #TMV2.

Closing out #TMV2 is “Hold Up“. DJ Grand Mill seeks to encourage those who may feel overwhelmed on the album’s final track. Mill also takes the opportunity to sum up the album’s theme stating “Talk by Faith, walk by Faith, Live by Faith, saved by Grace.”

As previously stated, the fact that #TMV2 is a free download all but eliminates the need to decide whether or not to download this album (if you are a hip hop fan that is). DJ Grand Mill clearly takes his calling seriously. That fact is equally evidenced in his lyrics and production that accompanies them. The biblical references found throughout are also clear indicators that he understands the responsibility of referencing God’s will for us all.

Do yourself a favor and download the encouraging and entertaining labor of love otherwise known as #TMV2 from DJ Grand Mill.