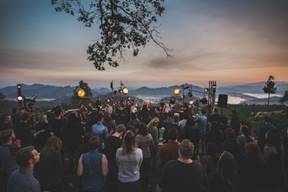 The Story of Bethel Music’s We Will Not Be Shaken by Mark D. Geil

It’s a stage like no other, extending from a mountainside like a rock outcropping, with verdant evergreens framing peaks in the distance, shrouded in mist. Bethel Music’s Kalley Heiligenthal gives voice to the hearts of the believers present, as natural as the waving branches of the California redwoods: Your love is devoted, like a ring of solid gold. Like a vow that is tested, like a covenant of old. It’s a proclamation of praise to the Rock more solid than that mountainside, the only one worthy of this confidence in His children: We Will Not Be Shaken.

That’s a stirring minute from Bethel Music’s highly anticipated new CD/DVD, We Will Not Be Shaken. It’s a product of a season in the life of the team that so many believers will identify with, summed up by Brian Johnson: “As a community it’s been one of the hardest and best seasons we’ve ever gone through. There has been so much life as a result. It has felt very honest. Like David’s response through the Psalms – he didn’t ignore the hard stuff going on, but he also reminded himself of God’s faithfulness and goodness and chose to go forward with that mindset.”

Isn’t it remarkable that as God leads us through both hardship and triumph, He can produce in us what Brian calls “so much life,” if we only let Him? That theme emerges in the standout track “In Over My Head (Crash Over Me)” co-written by Jenn Johnson and John-Paul Gentile. The song acknowledges the truth that, despite the need we often feel to keep everything perfect and presentable in our busy lives, God isn’t looking for us to have it all together. As Jenn relates, “The song puts a different spin on the idea of being ‘in over our heads’ – one that celebrates the risk and the yielded-ness of that feeling, even acknowledging it as a good thing when God is leading you. Though someone may have years of relationship and history with God, there is always more to discover and step into. There can always be forward movement through any situation. God is constantly inviting us to trust Him in greater ways, even in seasons that feel out of control. It’s really freeing to realize we are never going to ‘arrive’.”

A theme emerges as these songs emanate from the wilderness, and it fits the majestic setting. God, who is massive, who is faultless, casts His attention and affection on us, who are so small and flawed.  “You Don’t Miss a Thing,” by Amanda Cook and Bobby Strand, revels in this paradox: “What a mystery / That You notice me / And in a crowd of ten thousand / You don’t miss a thing.” And not only does this great God notice us, He actually chases after us, a remarkable prospect declared in “You are My One Thing” by Hannah and Paul McClure: “Your voice ever close, You called me / You never gave up pursuing.”

It’s also been a season of remarkable growth for Bethel, including the addition of new artists from within the community. The team views this expansion, and the diversity of songwriters and performers represented, as a blessing and a strength. Brian notes, “Every time we add new artists it feels like our focus is strengthened. We believe variety is good. Although we’ve got a lot of songwriters who are part of this record, the message of each song all points to the same God, His nature, and who we are in Him. We’re glad we’re not saying the same thing in the same way. We allow for a lot of freedom rather than control.”

Given that strong sense of community and that strength of focus, it’s appropriate that the album’s title track emerged not from a songwriting session, but from a spontaneous moment of worship during a Sunday morning service at Bethel Church. That’s part of the nature of the Bethel collective: to allow God the freedom to move through the entire team, and to try to be good stewards of what He is saying.

Night has fallen, and the mountains are veiled in darkness. Steam from the heat of stage lights forms an ethereal cloud behind Brian Johnson as he sings, with eyes closed and with a voice of understated confidence, “Though the battle rages / We will stand in the fight / Though the armies rise up against us on all sides / We will not be shaken.”

Arms rise and impulsive applause erupts, like the sound of the very rocks crying out the name of Jesus. And a small group of believers knows with complete assurance that the God who created the very mountainside on which they stand knows their names, cares for their souls, and pursues them in love.