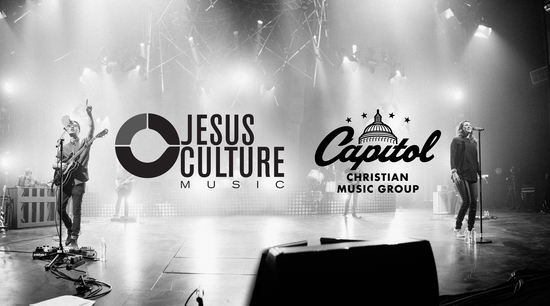 Capitol Christian Music Group (CCMG) announces a worldwide label and co-publishing partnership with Jesus Culture Music, a ministry and label based in Sacramento, CA and one of the most influential worship movements around the world. Effective April 1, 2015, Jesus Culture Music’s entire catalog, which includes 25 albums and 150 songs, will transition into this partnership where CCMG will be responsible for the marketing, promotion, administration and distribution of such copyrights, artists, catalog of product and forthcoming releases.

On April 7, 2015 three new albums will be released through this new partnership including This Is Jesus Culture, a collection of some of the group’s most popular songs throughout the years; Jesus Culture Music presents Bryan & Katie Torwalt, a compilation of the duo’s most well received songs; and Real Love from Derek Johnson, the debut solo release from the Jesus Culture worship leader. In addition to these new projects the entire Jesus Culture catalog will be re-released.


“It’s truly and honor and significant responsibility to come alongside Jesus Culture to represent these influential and important artists, worship leaders and songs,” shares Capitol CMG President/CEO Bill Hearn. “The entire Capitol CMG team is inspired by the opportunity to support the vision of Jesus Culture Music and are looking forward to the impact we believe this new partnership will have on culture.”

CCMG will collaborate with Jesus Culture Music on the development of their impressive artist roster, plus marketing and promotion of the entire Jesus Culture catalog and any future releases. In addition, Jesus Culture and CCMG will work closely to use marketing and promotion channels that maximize the reach and impact of their music using platforms such as CCMG’s online resource and community for worship leaders, WorshipTogether.com, to promote their songs to the church.

Kim Walker-Smith, President of Jesus Culture Music and Jesus Culture Publishing, states, “We are thrilled to begin our global partnership with Capitol CMG. We believe this new relationship will expand our reach to territories we have yet to touch. We are equally as excited to begin our partnership with Capitol CMG Publishing which will introduce new avenues to reach the local church with the songs that are shaping our movement.”

Jesus Culture Music is Sacramento, CA-based and led by Senior Team Director Banning Liebscher. Jesus Culture was formed through the momentum of a movement that is focused on equipping a generation to transform society by bringing people into an encounter with God’s love through worship and discipleship. Jesus Culture Music albums capture the heart of this movement. Jesus Culture Music has sold more than one million albums worldwide since their debut project in 2005 and garnered more than 3.8 million followers on social media and over 34.5 million views on YouTube.


Jesus Culture Music is a label that contains 12 artists including: Jesus Culture Band, Kim Walker-Smith, Bryan and Katie Torwalt, Chris Quilala, Kristene DiMarco, Derek Johnson, Justin Jarvis, Andrew and Mary Kat Ehrenzeller, Chris McClarney, Skyler Smith and Josh and Amberly Klinkenberg. To date, the Jesus Culture Band has recorded ten albums and released a total of 25 projects on their music label. The latest release from Jesus Culture Band, Unstoppable Love, climbed to No. 2 on the iTunes overall chart and debuted at No. 25 on the Billboard Top 200 chart and No. 1 on the overall Top Christian/Gospel Albums Billboard retail chart.