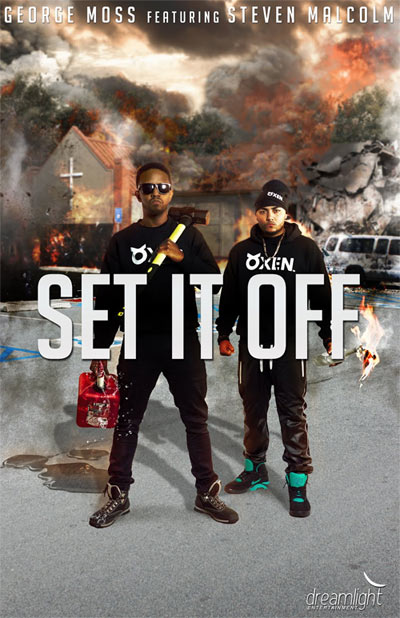 The Grand Rapids, MI based rapper George Moss has released his brand new single “Set It Off” featuring Steven Malcolm today. More details on the single can be found below.

People don’t just wake up one day and decide to blow up a building, it’s something that builds up over time. George Moss has felt a pressure building up in him over the past few years. It all began after finally seeing success in the Christian music industry. After hearing his songs on the radio, meeting people and touring across the country, God stirred something up inside of him.

George states, “I’ve gotten to see and experience the top of the Christian music industry first hand. As I would go out to these cities and venues I began to realize that our Christian culture, those that listen to Christian music and go to Christian concerts, are largely Biblically illiterate. Out of 100 kids that go to your average youth group, maybe 1 or 2 actually read and study the bible themselves. I think it’s mostly due to the fact that we have created a culture that is okay with just going to a building and participating in the activities, that we miss the mission that we are called to do.”

We hear about the church over and over and we automatically relate it to the building. However, the church is not a building, services, or programs that you attend, the church is the people. This year George feels that God has really called him to destroy our false concepts of what church is, in order to establish what God says the church is.

Statistics show that teens are leaving the church after they graduate or as they get older, because it seems fake. They aren’t really learning about God and growing closer to Him, they are just there to hang out with their friends. Churches have become a label, people ask “What church do you go to?” instead of asking “Are you a part of the church?”.

George’s mission isn’t necessarily evangelical. Although it is important to spread the Gospel and reach out to unbelievers, God has laid it on his heart more and more recently to reach the people in the church. To evangelize to the people trapped in the false idea of the church and destroy this illusion, so that we can see the real church.

”This is isn’t about destroying the church, its more of a rescue mission to save people from the bondage of believing that they are saved simply because they go to church or by what they have been taught. Yet, scripture would say that they are going to hell.”

George feels, “There are millions of people in our church today that say “Lord, Lord” claiming that they will go to heaven. I can’t take it anymore!! I can’t keep overlooking it. The Gospel is too important to just maintain tradition in order for people to like me, or get booked at churches. I have to share the truth of God’s word, even if its offensive. My mission isn’t just to appease ‘the church’ in for the sake of my career.”

His career is no longer about trying to make the next hit song, trying to get on the next big tour or trying to sell his next album. His only mission is to promote the Gospel. It can be scary to offend people, but something needs to be said. George feels like God has called him to do just that, and he is ready to take some drastic measures in order to wake people up.