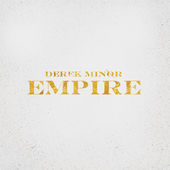 2015 has already launched as a pinnacle year for acclaimed rap artist, producer,and entrepreneur Derek Minor.  As co-owner and CEO of Reflection Music Group (RMG), Minor is poised to impact the market with releases from an impressive roster of groundbreaking artists who share his musical vision, including Canon, Deraj, Tony Tillman, B. Cooper, & Chad Jones.  This week, Minor unveiled his new album, EMPIRE, via RMG, and is preparing to kick off a two month run on the “From Now Until Forever” tour.

No stranger to success, Minor’s most recent project MINORVILLE peaked at #1 on the Billboard Gospel Album Chart and #2 on both the Christian and Rap charts.  With Dove Award and Stellar Award nominations under his belt, Minor has no plans to rest on these accolades.

EMPIRE is Minor’s fifth studio album, and marks his debut under his RMG moniker. Already receiving early attention from fans and critics, EMPIRE is also turning heads in the sports and music community at large.  The album received early success from fans, reaching the #1 spot on the iTunes Rap and Hip Hop charts.

Minor takes the album’s theme of growing the Kingdom of God seriously, and enlisted an all-star cast of like-minded artists to join him on the project. Derek shoulders much of the production on EMPIRE but also features producer heavyweights such as SykSense (Drake, 6god), Gawvi (Lecrae, Andy Mineo), Tyshane (Lecrae, Tedashii), Black Knight (KB, Andy Mineo) and Dirty Rice (2015 GRAMMY Nominee for Lecrae’s “All I Need Is You”), and taps the vocal talents of A-list artists, including Lecrae, Colton Dixon, Tedashii, Anthony Evans Jr., and Leah Smith, to name a few.

On the heels of the album release, Minor will launch the “From Now Until Forever” tour with Humble Beast Recording artist Propaganda and KJ-52 (TPC MUSIC).  Special guests include DJ MORPH on each show and many others throughout the tour.  Kicking off March 5, the tour is slated to hit 32 US Markets and opens up the first night at the infamous SXSW Music Festival in Austin, TX. Sponsored by NGEN and Spotify Music, the tour offers a unique advanced purchase exclusive pre-show offer to include a hip hop panel, exclusive un-released tour digital EP along with early entry to the show and one on one time with the artists from the whole tour.

The tour promises to be a night focused on building and investing in the future of youth in each individual community.  With a commitment to encourage, equip and enable young people to take ownership in their voices and celebrate diversity in their lives, the tour continues the EMPIRE theme, starting here on earth, “from now until forever”.

“I’m super excited to be traveling the some amazing artists and friends,” explains Minor.  “The goal of this tour is to encourage us to love one another today because forever begins now. “

Derek Minor has partnered exclusively with GOA for booking and Teresa Davis and The Paradigm Collective for management services.

Save Me (featuring J Paul)

Right By My Side (featuring Chad Jones & Anthony Evans Jr.)

Until the End of Time (featuring Lecrae & Canon)

Derek Minor – EMPIRE. In stores and online as of January 27, 2015.  The RMG label is distributed through eOne Entertainment.

FROM NOW UNTIL FOREVER Tour dates (more dates to be confirmed in the coming weeks):

Read our review of Empire here.