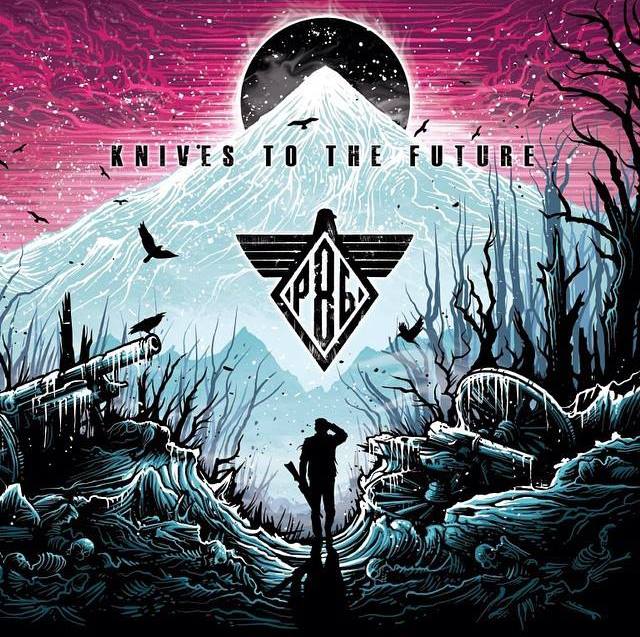 Christian hard rockers Project 86 have been around for nearly two decades now. Since their inception in 1996, the Orange County natives have recorded and released eight – make that nine – full-length studio albums, toured the country and world countless times, and undergone multiple personnel changes. In fact, the shift in members has occurred so often that the only “original” member left is founder and frontman Andrew Schwab. Now two releases removed from this, Schwab and his new crew is back once again with their ninth and latest, Knives To The Future. The follow-up to 2012’s Wait For The Siren released back in November, and is in many ways a continuation of its predecessor.

The journey begins with a brief intro that sets the scene, before the opening song “Spirit Of Shiloh” blasts into existence. The speedy 3/4 meter and groovy bassline right away erases any doubt of this song being mediocre. “Acolyte March” is perhaps the heaviest Project 86 song to date, continuing the usage of 3/4 and additionally employing a dark atmospheric vibe. The album’s title track slowly fades in before kicking straight into a tight drum pattern, complementing the other instrumentation along with Andrew Schwab’s partly yelled and partly sung vocal delivery quite well. “Son Of Flame” slows things down just a bit, but packs its own punch in that it isn’t your typical ballad; this track is just as dark as it is melodic. The foot-stomping “Captive Bolt Pistol” is the shortest song on the record, and right away proves why.

“Ambigram” follows it up, and subsequently kicks off the second half of the album, with an off-beat groove and an almost island-like feel in the verses, all the while still being undeniably Project 86. Although not a bad song, nothing really stands out in “Genosha,” that is until it leads straight into the following track, “Pale Rider.” The lead radio single is reminiscent of the band’s Rival Factions era in regards to the song structure, particularly that of the verses. “Valley Of Cannons” returns to the dark key from a few of the earlier tracks, but what really shines through on this one is the combination of Schwab’s singing with the upbeat tempo. “White Capstone” picks up right where “Valley Of Cannons” leaves off, so consequently the flow between these two is impeccable. “Oculus” does a phenomenal job of closing out the album on a high note, blending piano and strings seamlessly in with the rest of the band. This song continues to build throughout until its peak. By the end, the only part left is the piano, which eventually fades away itself, ending Knives to the Future in the best possible way.

Some of the highlights from Project 86’s most recent effort include “Acolyte March,” “Ambigram,” and “Valley Of Cannons,” Although there are, like practically any other release, a few low points on the record, that tally stays at only a few. All in all, the newest album from the long-time Christian rockers is a solid release and a must-have for any fan of the band.