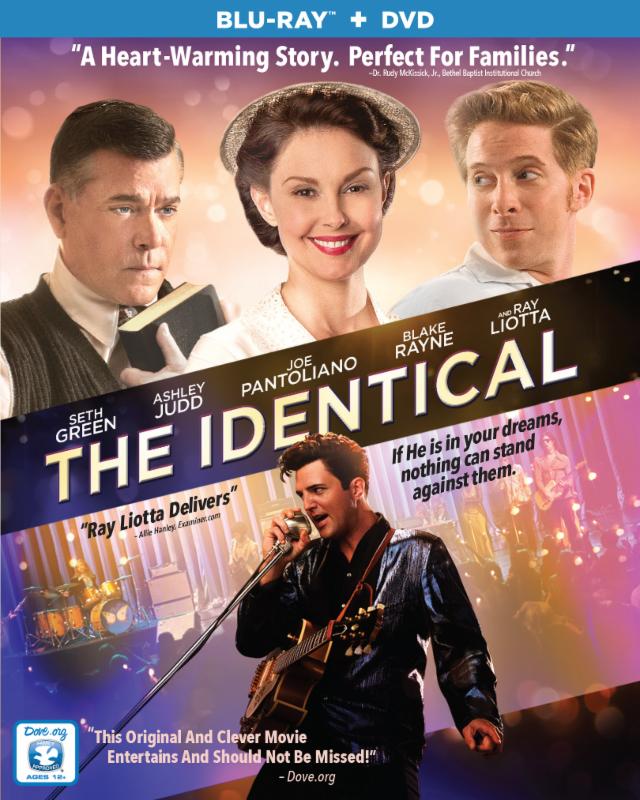 Redemption and rock ‘n’ roll combine to create an intriguing backdrop for the faith-based feature film, The Identical. This powerful story about a young man’s search for purpose and identity releases today on Blu-ray™ Combo Pack, Digital HD & DVD from City of Peace Films, Capitol Christian Distribution and Cinedigm (NASDAQ: CIDM). It can be found at Christian retailers including Family Christian, LifeWay Christian, Mardel, Parable, Munce Group and Covenant Group, as well as Walmart, Amazon and more.

The Identical offers viewers a compelling ‘what if’ story. What if twin brothers were born to a poor couple during the Great Depression? What if another young couple, a preacher and his wife who were unable to have children, agreed to take one of the boys and raise him as their own? What if one of the twins grows up poor, but achieves meteoric fame and fortune in the heady days that gave birth to rock ‘n’ roll? What if the other twin has the same musical gifts, but struggles between chasing fame and pleasing his parents? What if his ultimate choice uncovers the long buried family secret about his identity?

ChristianFilmDatabase.com calls The Identical a “story about the restoration and the reconciliation of a family broken apart by culture, creed and tradition,” and says “movie-going audiences will be drawn to this timeless tale of love, hope and redemption that speaks to all generations.”

“Liotta is totally convincing as Reece. Opposite him Judd has her best role in years. The surprise of the film is Rayne. He seems to have been created to play this role…fans should latch on to him and make him a star,” says Jackie K. Cooper of The Huffington Post. “This movie entertains–totally. Believe me on that.”

The Dove Foundation awarded The Identical its Dove “Family-Approved” Seal for ages twelve plus, calling it an “original and clever movie [that] entertains and should not be missed!”

The Identical DVD and Blu-ray features over 20 original songs, all produced and co-written by Motown legend, Jerry Marcellino, and the film’s producer, Yochanan Marcellino. The CBA version of The Identical DVD features additional bonus material that is not available in the mainstream version.

The Identical is a redemptive movie about a young man, the son of a preacher, who rejects his father’s desire for him to join the ministry and instead embarks on a career as a rock singer. As he struggles to pursue his dream and rise to stardom, he finds love, pain, success and failure, and ultimately uncovers a hidden family secret that reveals who he really is. It’s a captivating story about a family restored, and a life discovered.

The Music of The Identical

The Making of The Identical

About City of Peace Films:

Cinedigm is a leading independent content distributor in the United States, with direct relationships with over 60,000 physical retail storefronts and digital platforms, including Wal-Mart, Target, iTunes, Netflix, and Amazon, as well as the national Video on Demand platform on cable television. The company’s library of over 52,000 films and TV episodes encompasses award-winning documentaries from Docurama Films®, next-gen Indies from Flatiron Film Company®, acclaimed independent films and festival picks through partnerships with the Sundance Institute and Tribeca Films and a wide range of content from brand name suppliers, including National Geographic, Discovery, Scholastic, WWE, NFL, Shout Factory, Hallmark, Jim Henson and more.

Additionally, given Cinedigm’s infrastructure, technology, content and distribution expertise, the company has rapidly become a leader in the quickly evolving over-the-top digital network business. Cinedigm’s first channel, DOCURAMA, launched in May 2014, and is currently available on over 165 million consumer devices including Roku, Xbox and Samsung, with additional platforms currently being rolled out. Earlier this year, Cinedigm also announced plans for a Comic Con branded channel, in partnership with WIZARD WORLD, for launch in Q4 2014. The Company recently announced its third OTT channel via a partnership with The Dove Foundation. DOVE MOVIE CHANNEL will be a digital streaming subscription service targeted to families and kids seeking high quality and family friendly content approved by Dove.