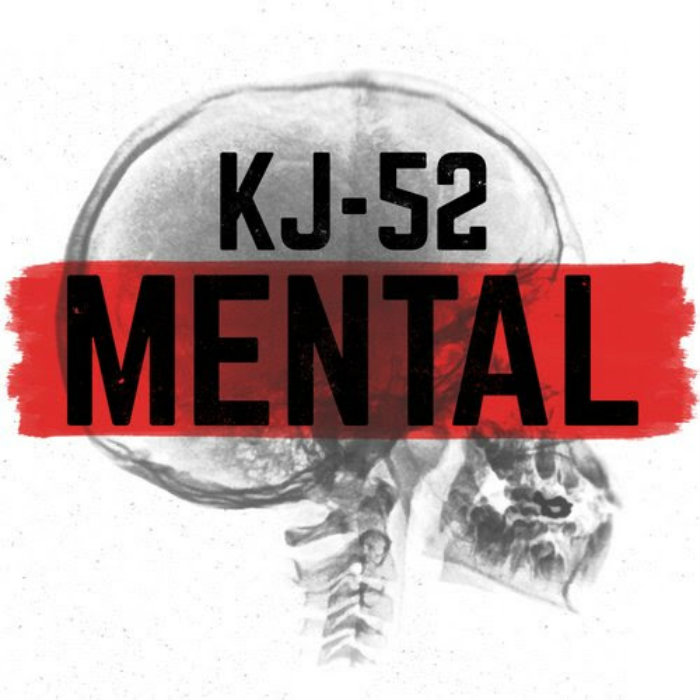 This summer I got to hear KJ-52 perform a couple songs off this album, Mental. However, I have been left waiting for the rest ever since, and it’s been driving me up the walls. I’ve now finally got to hear all of it, and I tell ya – it was well worth the wait. In a time where young minds are being filled with things far outside of the Godly realm, KJ is putting hope and love into us. It definitely works. I’ve met more people who have been blessed by KJ’s music than by almost anyone else. Just by wearing band merch, I get at least a dozen compliments from fellow fans. That says something about an artist, and is only fitting because KJ is always pushing the “norm” of the music industry with his love for the youth, and there’s something special about someone devoted to showing God to us.
The name “KJ-52” came from two places. “KJ” is from his old rap name, King Jonah. The “52” part (pronounced five-two) is from the story in the Bible where God took 5 loaves of bread and 2 fish and turned it into something bigger than anyone imagined. KJ prays that God takes his music and multiplies it into something bigger than he could ever do on his own.

It is definitely looking that way, as KJ has done some really neat things this year, such as breaking a Guinness World Record for “longest team freestyle.” He did so with fellow rappers/beatboxers Sicily, Jerrell Johnson, Isaac Knox, Heir Jordan, and Goldinchild. This freestyle was thirteen hours and two minutes, guys. Wow. Now, KJ-52 is back at it again with his fifth studio release, called Mental. He called it Mental because, as he says, “It’s twofold: people who want to adhere to a biblical worldview are looked at as crazy, out of touch, intolerant. But what we’re trying to say is that there’s hope to hold onto when the world feels like it is going nuts.” He continues. “You can look around and see that every day—school shootings, bullying, adults self medicating and trying so many things in search of an answer.”

That hits close to home, because we find violence, evil, and pain seemingly everywhere we turn. This world is in great need of people spreading God’s word through the darkness, and KJ is dead-set on getting to all the nooks-and-crannies of today’s youth, which is amazing.

This project took that message and ran with it. A few remixes are on this album, such as “Fight Music” – a remix of the song “They Like Me” KJ did with Lecrae on his last album, Dangerous. This song brings to life a common problem with rap music – the issue of races. I really enjoyed this remix, and I love that KJ emphasized this particular song’s message by doing a remix on this album. I’ve also heard the other side; people feeling disappointed for getting a remixed song when they wanted new stuff. I guess you’ll have to listen and decide!

“Game Face” ft. KB and Soul Glo Activatur is an epic way of calling out to us as Christians to get our game face on and keep walking through life – even when it’s hard. As KJ says, “I love sports and that speech coaches give about going into battle and getting your game face on,” he says. “That’s such a picture of this world today. People fight just to get out of bed, fight traffic, fight temptation, fight the enemy. If you don’t get your game face on in this life then you’re going to get run over.” I love this song because it’s relevant to everyone no matter what path you’re taking. You have to keep our game face on all the time – no matter how old you are.

Speaking of relevant and much-needed messages, there’s “Brand New Day”, which proudly anthems the fact that because we love God and because of what He did for us, we can start a “brand new day” full of hope every time we wake up. A lot of our time is spent living in the past, but we really need to move forward, because that’s where God’s great plans are waiting for us. We always have God standing with open arms to welcome us to forgiveness, even when we don’t feel it. In those hard times, here’s a song that will bring you some hope.

Next is my personal favorite, “Island of the Misfit Toys”, a song to all the kids out there struggling with being a reject of society. It’s a hard thing when you don’t feel loved. Everyone will be – or has been – there at some point in their lives. Besides this song’s message being awesome, the music to it is breathtaking as well. There is something different but refreshing about this song, and when you put your headphones on, your mind will be blown. This is by far my favorite off the album, for both the lyrics and the music behind it. KJ did something a little different on here, which is only fitting for the song, and I love that about it!

Another thing different about this album is KJ’s radio single, “Tonight”. You hear KJ sing on this one more than he raps – he killed it, by the way – and you’re going to fall in love with it. One thing I really appreciate about this album is the way KJ experiments with things. It’s a project full of remixes, new songs, and new boundaries. Although “Tonight” is just a taste of the project, it represents it well. It’s different, but it’s got a way to capture your attention. This album will not only capture your attention, but capture your heart.

All in all, I love Mental. It’s new, it’s real, and it’s amazing. I have a feeling this is one people are either going to love or hate, but I strongly believe that for eight dollars, it’s well worth the risk. KJ is always worth supporting, as he supports me and several other people I know, and overtime we have had a lot of fun being able to hang out at Camp Electric. He’s one of my favorite people, and it’s rare to find someone as genuine as him. Here’s to more differentiating, more vocal tracks, and a lot of love for KJ-52.