Touring in support of its second consecutive No. 1 selling Billboard Hard Rock album, OXYGEN:INHALE, released Aug. 26 through The Fuel Music, the event with Cooper followed tour dates in Russia that saw capacity crowds in every venue. Photographer Melissa Fox captures (below) the enthusiasm from Moscow on Nov 23 at Ray Just Arena. 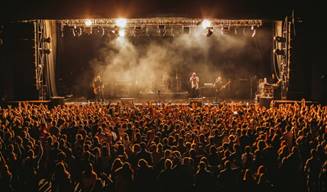 While on tour, TFK is playing fan favorites and hits from OXYGEN:INHALE like “Born This Way,” which is Top 10 at Under The Radar, No. 22 at Active Rock, No. 23 at Mainstream Rock and continues to climb all three charts. The song, which became the band’s 15th Christian No. 1 rock hit, is similarly being embraced as a “fists-in-the-air” sports entertainment anthem, most recently firing-up faithful WWE fans as the official theme song for the “TLC: Tables, Ladders and Chairs” pay-per-view event Dec. 14 at Quicken Loans Arena (Cleveland, OH). The song has also been featured on NASCAR and Southeastern Conference (SEC) college football games on ESPN as it picks up over 638,000 views and 6,200+ likes on YouTube.

Although OXYGEN:INHALE dares to lower the volume on a few songs and allow the melodies and words to soar, tracks like lead single, “Born This Way,” and “Untraveled Road,” are two adrenaline-fueled tunes already tapped for highlight reels. Adopted by the NHL’s Ottawa Senators as their 2014-15 anthem and being used in the “pump-up” video for the Montreal Canadiens’ 2014-15 season, “Untraveled Road” is like marching orders set to music, with vocals delivered with hip hop urgency before exploding into a chorus that reminds of Linkin Park at their catchiest.

With featured performances and headlining positions on the summer festival circuit after performing at the premiere festivals Rock on the Range and Rocklahoma for the last two consecutive years, the Ontario, Canada-bred TFK has been a continuously escalating highlight reel since their formation in 1997.  With best-selling albums, eight Active Rock hits and a slew of soundtrack slots, the group has literally infiltrated every facet of pop culture. They continue to receive ongoing ESPN appearances, as well as various NASCAR, MLB, NHL, WWE, NCAA and NFL airings (including the 2010 Super Bowl), along with the “GI Joe” movie trailer, WGN-TV’s “Smallville” and EA Sports’ NHL 2010 and 2013 video games. Remarkably, the three most recent albums, OXYGEN:INHALE, The End Is Where We Begin and Metamorphosiz II The End Remixes Vol. 1 & 2, receive about 358,000 daily views in combined streaming across all of YouTube.


Check out our teenager’s review of Oxygen: Inhale here.