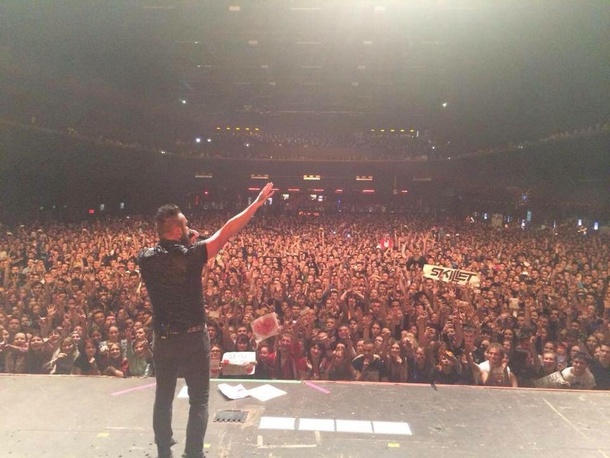 Skillet Sells Out Across Europe

It’s been a massive year of performing to sold-out and capacity crowds across the globe for award-winning Atlantic/Word Records rockers Skillet, and the latest was during their first headline tour across Europe throughout October and November. Selling out 60% of the venues, including London, Moscow, St. Petersburg, Warsaw, Antwerp and Cologne, the band also packed houses in Stockholm, Zurich, Hamburg, Glasgow, and cities in Lithuania, Latvia and Estonia.

“We honestly had some of the greatest shows of our entire career in Europe this past fall,” remarks lead singer John Cooper. “The fans were just insane, and to pack houses in cities where we’ve never headlined before, as well as across Russia, which has become one of our favorite countries to rock, well, we were just amazed!”

The tour represents the GRAMMY®-nominated band’s third trip to Europe in a year amidst co-headlining The Roadshow, a spring co-headlining tour with Third Day and sold-out shows with TobyMac and Lecrae.

Additionally, headline summer festival stints led up to the Rockstar Energy UPROAR Festival, on which Skillet joined multi-platinum artists Godsmack, Seether, Buckcherry and Pop Evil at stops throughout the country. Earlier in the summer, Skillet performed at multiple festivals throughout Europe, playing for thousands of fans. The summer and fall tours have seen the band gain a solid European following, all subsequent to last fall’s tour supporting Nickelback.

Beginning January 2, Skillet is pleased to be stateside as they headline the Winter Jam 2015 Tour Spectacular hitting 47 cities through March 29. Their current single, “Good to Be Alive,” was the most-added at Christian CHR radio its first week at radio and is seeing multiple spin increases each week. The track is the fifth single release from their 2013 album RISE, which has already garnered three No. 1 hits.