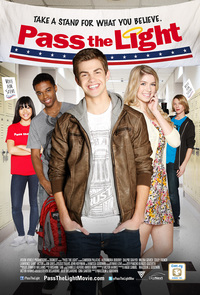 DigiNext, in association with Vision Vehicle Productions (VVP), announced today that PASS THE LIGHT is slated for an initial theatrical run at select Carmike Cinemas entertainment complexes around the country. The exclusive engagement starts February 6, 2015, with multiple screenings planned throughout the opening weekend and additional holdover dates and an expanded theatrical footprint to follow. Carmike is the nation’s fourth largest exhibitor, with more than 2,900 screens across 41 states.

Directed by Malcolm J. Goodwin (“American Gangster”) from a Victor Hawks (Broadway’s “The Producers”) script, PASS THE LIGHT follows 17 year-old student Steve Bellafiore (played by Cameron Palatas of MTV’s “Zach Stone Is Gonna Be Famous”) on a transformative journey from shy, unassuming teen through a community-uniting run for a local Congressional seat. Disturbed by a competing candidate’s use of religion to foster hatred, intolerance and divisiveness, Steve seeks to unite his town with campaign messages of kindness, love and positivity. The film also features Alexandria Deberry (Disney Channel’s “A.N.T. Farm”), Jon Gries (FOX’s “Taken” franchise), Lawrence Saint-Victor (CBS’ “The Bold and the Beautiful”) and Milena Govich (MTV’s “Finding Carter”). PASS THE LIGHT has received the Dove Foundation “Faith Friendly” seal for ages 12 and up.

Subsequent to its in-theatre dates, the movie will be made widely available via digital downstream across multiple media and portals through DigiNext’s unique Direct-to-Consumer (DtoC) release platform. The DtoC program is a customized end-to-end strategy seeking to maximize the financial performance of individual titles – including box office receipts, electronic sell-through and ‘eventized’ screenings for target affinity groups and the general public.

Bud Mayo, DigiNext Co-Founder and Carmike’s President Alternative Programming & Distribution Division stated, “We expect PASS THE LIGHT to resonate extremely well with audiences across Carmike’s growing national footprint initially, and plan to widen our theatrical release footprint to include other theatre operators following the movie’s exclusive debut on our screens.”

Malcolm J. Goodwin stated, “Everyone connected with PASS THE LIGHT is thrilled that our movie will soon be showing at many of Carmike’s theatres beginning next February. Bud Mayo, Larry Meistrich and Ari Friedman of DigiNext clearly articulated why their unique end-to-end release platform was an ideal option for our films. We are passionate about the anti-bullying, faith-inspired message in our film and are excited to see it reach its audience.”

DigiNext Co-founder Larry Meistrich stated, “Malcolm and his talented team have created a passionate and heartfelt movie, and we are very pleased that DigiNext has been given this opportunity to partner with them. Pursuant to our agreement, DigiNext also plans to release their romantic musical CONSTRUCTION via a similar DtoC platform strategy later in 2015. Hopefully this is the beginning of a mutually beneficial and long-term relationship with VVP.”

Locations and specific show-times for PASS THE LIGHT will be announced in the coming weeks, with advance tickets available online via www.carmike.com and ticketing partners www.movietickets.com and www.fandango.com.   See the trailer at the official website, http://passthelightmovie.tumblr.com/.  Connect with PASS THE LIGHT on Facebook /PasstheLight, Twitter @PassTheLightMov and via Instagram @passthelightmovie