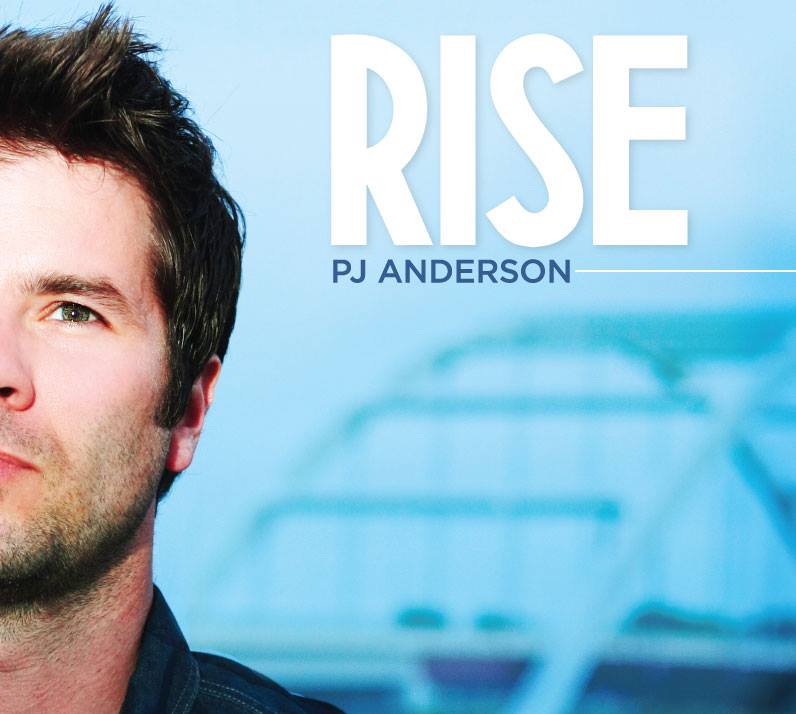 PJ Anderson Is Compelling In His Album ‘Rise’

Nashville is known for housing some of the best musicians in the industry, and PJ Anderson is no exception.  His latest album Rise is his fourth LP release, and debuted at #11 on the iTunes charts. The first single from his album named “Beautiful Mess” placed #40 on the Gospel/Christian charts, and he has been named as a “New and Noteworthy” artist on iTunes.  Creating Rise with names like Daniel Ornellas (Tree63, Gungor, Brenton Brown, Matt Maher) and Shawn Williams (Martina McBride), PJ’s heart for this album comes from a place of honesty and authenticity, “The theme of RISE is rooted in the call of God to rise and love as He loves; to serve as He serves,” he says on his website.

Opening with “Rise,” this is an empowering and solid title track. PJ’s vocals have a texture which sits somewhere between the rock and country genres, and he uses this to bring together a tune which balances a driving electric guitar rift and a catchy acoustic sound. A bold song, it challenges listeners to actively live for God and give their all for Him. “Come Alive” will remind you of Casting Crowns, and the conviction of the vocals and country bias of the melody show that Anderson has the vocal and song writing abilities to match his peers.  Managing to bring an intimacy to the track which you would normally only achieve in a small gig, this reveals the depth of the singer’s character and storytelling abilities.

“Grace Is Hope” brings a new dimension to the album, using a percussion section to create an ambience to the low key track. While this song is not noted as a duet, the female vocals which come alongside PJ bring a lightness and ethereal quality to the song. The chorus and bridge really bring this song together and the use of strings enables it to soar towards the end. This female harmony continues in, “Calm My Heart,” as Anderson speaks about the peace that we feel when we put God first in our lives.

PJ achieves the right balance of strength and vulnerability in “No Rebel Rise,” and we are given a soulful ballad with a powerful chorus. The two fold meaning of this song as the lyrics enforce the might and power of God in light of our internal struggles with him and the outside forces of the world that come against us as His followers. The electric guitar and drums create a great light and shade to the meaning of this song, and this becomes even more obvious towards the end of the track. “Your Grace Is Amazing” featuring Natalie LaRue is a country retake on the hymn, “Amazing Grace.” A foot tapping rendition of the song, the organ and gospel choir are met with acoustic and electric guitars, modernizing the classic tune.

The lead single from the album “Beautiful Mess” gives us a chance to hear PJ’s voice in its purest form, and the instrumentation of the first verse is stripped back for one of the strongest tracks on the album. With a pop/rock edge, this tune is very radio friendly and is a fresh and welcome addition. The repetition in the bridge of “No mess is so great, that you wouldn’t save, and set us free” opens the song up, and the texture of Anderson’s voice gives this an unique and appealing quality which listeners will love.

The honesty in “If We Knew Your Love” is breathtaking, and the laid-back track discusses how our behavior would change if we truly understood the nature of Christ’s love. There is little doubt that PJ is a brave songwriter as he touches on the topics of people in the church hurting each other, and calls for unity in the body of Christ.  “In Your Name We Rise,” is a fun follow up and lightens the mood. A sense of expectancy builds in the rhythmic percussion section, and the electric guitar rift throughout the song is a clear highlight. This song will encourage you with a message about God’s great love for us.

Finishing up with, “To See Your Glory,” heavy synths set the tone for a dramatic and poignant conclusion to the album.  Telling the story of people often out cast in society, PJ puts a human face and a heart to issues that can be easily passed over.  This track is simple in the best way. His vocals are strong and solid, the melody consistent and predictable, and this allows the message of the track to break through. Potentially the most direct and compelling track on the album, the lyrics and music will move you to express the love of God in a practical and non-judgemental way.

PJ Anderson’s Rise brings together facets of rock, country and pop music to create 10 tracks designed to draw the listener closer to God and in turn send them out into the world. Without a doubt the highlight of this album is PJ’s honesty, and his raw and compelling take on Christ, our response to him, and the needs of the world. PJ has sent a precedent for the honesty we can expect from some of today’s best musicians, and due to this it will move you tremendously.  You can grab your copy of PJ Anderson’s Rise today.